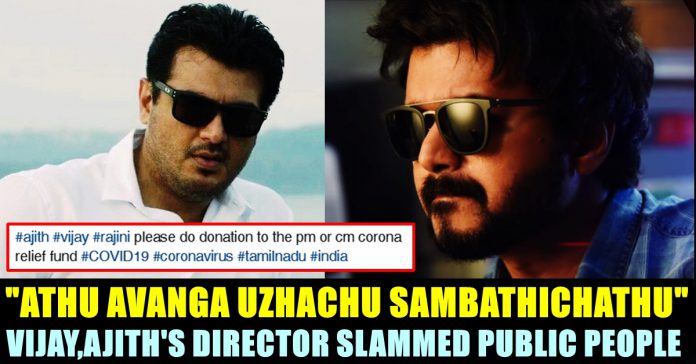 Director Perarasu who worked with both Ajith and Vijay, slammed public who are questioning about the money celebrities donated for the relief fund. As many people came forward to donate to PM Cares and CM fund relief, to help them combat the deadly Coronavirus which is being a threat to the whole country, people from cinema industry and sports industry are also donating big sum of amount. Due to the 21 days lockdown, many industries are financially affected and the workers of it are suffering in big time. In a way of helping the cinema industry, many of the stars from it are contributing their part for the workers. Superstar Rajinikanth announced Rs.50 lakh for the Film Employees Federation of South India workers.

Actors Sivakarthikeyan, Vijay sethupathi, Suriya donated Rs.10 lakh each for the people who are suffering from their industry. Meanwhile few celebrities who decided to help for the public people also announced about their contribution. Bollywood actor Akshay Kumar announced that he will provide Rs.25 Crores for the people affected by the Coronavirus through PM relief fund. Sports personalities such as Virat Kohli, Sourav Ganguly also made their contribution to the relief fund. Tamil actor Sivakarthikeyan reportedly gave Rs.10 lakh for the CM relief fund.

Meanwhile many fans in social media asked why high profile actors such as Vijay and Ajith are not coming forward to help the public at this time. As it is very well known that both these actors are two of the highest paid actors in South Indian film industry, no announcement made by them yet which made netizens to raise question against them.

Except #Ajith and #Vijay all leading stars from many film industries are trying to create awareness on #Corona. Wonder why these two are only interested in making money, especially the latter who uses fans for all audio launches #Master #Valimai #JanataCurfew #JantaCurfew

In a way of replying to all such comments, Director Perarasu who worked with Vijay in Sivakasi, Thiruppachi and with Ajith in Thiruppathi, has posted a tweet in his official twitter account. In his tweet, Perarasu asks people not to question actors who are earning through their hard work. “How much are the politicians donated who are ready to spend 50 and 100 crores to gain votes during election ?? These people are interested only in how much the actors are donating. The money actors earned is only through their hard work, not earned through corruption” he said in his tweet. 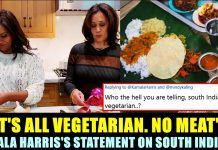