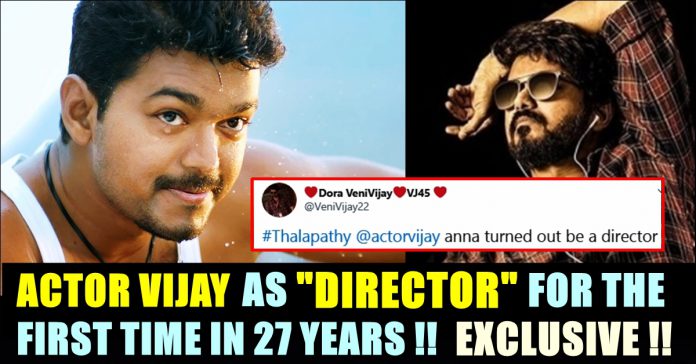 For the first time in his 27 year long cinema career, actor Vijay has wielded the megaphone for the first time. Going by a news report of a popular Tamil daily, actor Vijay became a “Director” through his upcoming film “Master”. The shooting of the 64th film of actor Vijay wrapped recently and the makers of it announced it as an update.

#Master It’s a WRAP😊129 days of shoot w/out break! This journey has been very close to my heart💛Thankyou @actorvijay anna for believing in me & my team ! Pulling off such a Himalayan task wasn’t easy w/out my direction team. Proud of you boys💪🏻 pic.twitter.com/3Qxpv8Weyq

The film “Master” has actor Vijay in the lead role and Vijay Sethupathi is going to play the role of an antagonist. Directed by Lokesh Kanagaraj, the film comprises an ensemble cast including Shanthanu, Malavika Mohanan, Arjun Das, Andrea Jeremiah etc. In last day of the film’s shoot, actor Vijay Sethupathi kissed Vijay in his cheek and the picture went extremely viral across the Internet.

Been an wonderful few months and it comes to a closure – Master shoot wrapped up !! Heart full of thanks to Thalapathy @actorvijay na, Makkal selvan @VijaySethuOffl brother and @Dir_Lokesh 😊 waiting for the #Master celebrations pic.twitter.com/SNNUUDcCW6

The shooting of the film took place in various places and faced so many problems so far including the pollution of Delhi city and IT raid in the Neyveli Lignite corporation. Now a latest report has said that actor Vijay directed a particular scene in “Master” movie. The scene contains director Lokesh Kanagaraj and additional screenplay writer Rathnakumar, according to reports.

As we all know, Rathnakumar is known for directing films like “Meyaadha Maan” and “Aadai”. Being one of the closest friend of director Lokesh Kanagaraj, Rathna Kumar acted a scene along with him in the film. The entire scene was directed by Vijay, says reports. The scene was shot for one day long and Vijay directed it by deciding camera angles and by uttering “Action” “Cut” at the sets of “Master”. He even taught acting to both the directors to act in that one particular scene.

As soon as the news surfaced, fans of actor Vijay got extremely happy and sharing the news in social media platforms with joy. Check out some of their reactions below :

Thalapathy Vijay is Become as a Director in #Master 😎😎 pic.twitter.com/DtoQL1A5Ga

As far as Thalapathy 65 is concerned, earlier it was reported that “Irudhi Suttru” fame Sudha Kongara is going to direct Vijay. Latest buzz said that A.R Murugadoss is going to start the sequel of Thuppakki as Vijay’s 65th film. Now, tell us how it would be if Vijay directs his own film in future ??