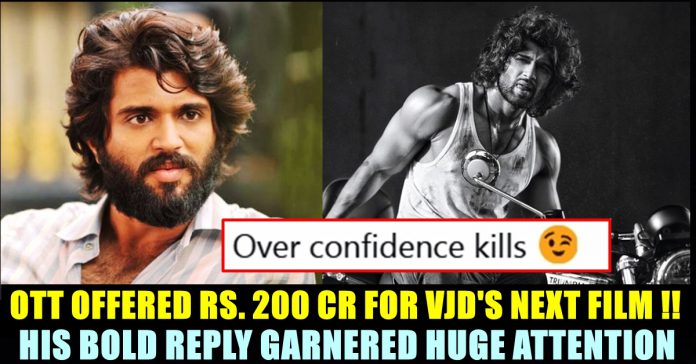 A reply made by South Indian actor Vijay Devarakonda to a buzz on his upcoming film getting 200 crore offer from an OTT platform has grabbed the attention of the Internet users. The actor who is known for his outspoken attitude, had said that he will do more collections than the said amount in theatres. It is very well known that the “devil may care ” attitude of him gained him a separate fan base and this reply made by him on Twitter garnered huge attention from the fans.

Vijay Devarakonda rose to fame through a Telugu film named as “Arjun Reddy”. The film became a huge blockbuster not only in Andhra but also in the states of the South Indian region. The film got remade in Hindi and Tamil by having Shahid Kapoor and Dhruv Vikram in the lead roles respectively. He went on to act in Geetha Govintham which also became a moderate hit. In a short span of time, Vijay gained a separate fanbase and his market reached a level that is equal to the top tier actors of Telugu industry. He made his debut in Tamil through a film named “Nota” which didn’t do well in the box office.

Apart from choosing bold scripts, Vijay also has this habit of making bold statements off screen. Most recently, a buzz surfaced in Internet saying that his upcoming film “Liger” has received a huge offer from an OTT platform. To make the film have a direct digital release, the unknown OTT platform offered rs. 200 crore including satellite rights in all languages, said Thy view in their post.

They further stated that the makers are considering the offer of selling the film for Rs. 200 crore in a digital platform.

The post seemed to have grabbed the attention of Vijay Devarakonda himself. In a way of denying the news and shutting down such rumours once and for all, Vijay said that the amount is too little and added that he will do more than that in theatres. “Too little. I’ll do more in the theaters.” Vijay said in a tweet as his reply on Monday.

Too little.
I’ll do more in the theaters. pic.twitter.com/AOoRYwmFRw

The tweet received 30k likes in no time with hundreds of reactions from his fans and followers. Trolls didn’t spare him as well. Many stated that the tweet shows the actor’s over confidence and few wanted him to realize the reality by considering the COVID 19 situation. Check out some of the reactions below :

There is a thin line between confidence and over confidence. And he is unable to find it. Nothing wrong on having good expectations on movie but he needs to consider the reality of pandemic and movie business.

Pic 1 – To all the positive quotes and comments

I think it would have been better if u use the word 'we' than 'I' bro. Puri sir also had a huge fan base than you. He can majorly pull the audience with his name itself 👍 #LIGER