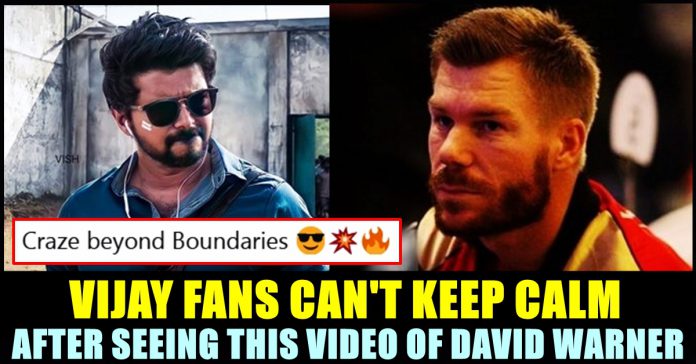 A recent video uploaded by Australian cricketer David Warner is going insanely viral among the fans of actor Vijay. Hashtag “Vaathi Coming” is trending in the micro blogging social media site with tweets and posts celebrating the actor’s opening song from his recently released film “Master”. Warner could be seen dancing for the fast beat with his kids for the song in his house and the most interesting part is, the cricketer tried recreating the dance steps of Vijay who is fondly called as “Thalapathy” by his fans.

Even after the film completed its theatrical run, the craze created by the “Vaathi coming” of Vijay starring “Master” is still unwinding. Before getting released in theatres, the Aniruth’s fast number released on youtube and left the fans humming. It was played as a wake up song for the contestants in the season four of Kamal Haasan hosting Bigg Boss show. After the visuals got released, the song attracted millions and millions of fans along with celebrities from other notable industries.

After winning the Syed Mushtaq Ali trophy, Tamil nadu team led by Dinesh Karthick shook their legs for “Vaathi coming” and the video went immensely viral across social media platforms. After that, Indian all rounder Ravichandran Ashwin, did a “Vaathi coming” while fielding in the Chepauk test in which he received “Man of the match” award.

Ashwin went one step ahead and made his teammates Hardik Pandya and Kuldeep Yadav to shake their legs for the song as well. South Indian actress Nazriya who is known among Tamil audience for her films “Raja Raani”, “Neram” came up with a video dancing for “Vaathi coming” in a most cutest away. Pan Indian heroines Shilpa Shetty, Genelia used the song as the background for their moves as well.

Now, David Warner who is known for attracting Indian fans through the social media posts of himself recreating the scenes and songs of Indian actors, uploaded a video in his official Instagram handle which shows him moving his legs for “Vaathi coming” with his kids. “Was bored today!! Thoughts on these moves 😂😂😂 name the song?? #funny #dance #lockdown #home” Warner wrote after adding the video.

The post blew up in no time with fans of actor Vijay trending it in all over the social media platforms. After uploading the post, Warner also reacted to some of the comments that surfaced on his post.

Check how Vijay fans are reacting to the post below :

*#VaathiComing was released on 10th March 2020, It's been almost 1.5 Years and still ruling the playlist and Trend list not just across South India Or India the trend is across worldwide 🔥💥 @actorvijay
UnStoppable Trend – #VaaathiComing #Master #Beast pic.twitter.com/pv6QOq8mYP

Watch the video song of “Vaathi Coming” below :