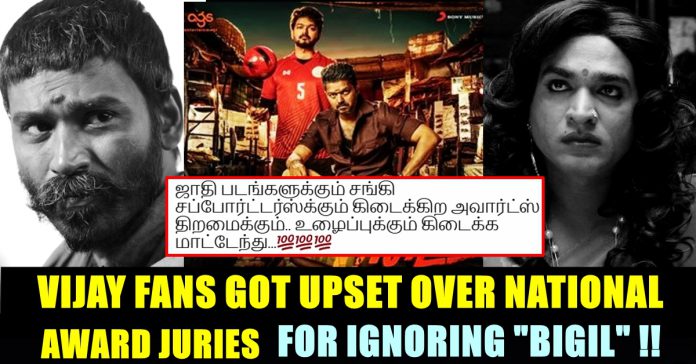 Ever since the announcements of National awards were made, fans of Tamil actor Vijay got upset and expressing their disappointment over the juries and selectors for not considering his “Bigil” in any of the categories. Many claimed that Vijay’s political stand against the ruling government made them not to consider the films that the actor got associated with.

The National awards for the films that were released in the year 2019 has been announced on Monday. South Indian cinema has got highly recognised as Marakkar: Arabikadalinte Simham, and Maharshi won the Best Film, and Best Popular Film awards respectively. Dhanush’s role as Sivasami in “Asuran” won him the best actor award for the second time in his acting career. The film also became the best Tamil film. Actor Vijay Sethupathi won his first national award as a supporting actor for acting as a transgender in Thayagaraja Kumararaja’s “Super Deluxe”.

Parthiban’s “Oththa Seruppu” garnered the special jury award and Rasul Pookutty won the national award for his work in the film as well. D.Imman received best music director award for composing music for Ajith kumar’s “Viswasam”. As soon as the announcements were made, people of Tamil social media wished the achievers by uploading posts and reactions.

Hashtags “Asuran”, “Viswasam”, Ajith kumar”, “Dhanush”, “Vetrimaaran” trended at the top on the evening of Monday. Meanwhile, fans of Thalapathy Vijay expressed their dejection over “Bigil” not getting any of the awards and argued that the Atlee’s directorial talked about women empowerment.

Bigil released on the Diwali day of the year 2019 and became a blockbuster with 300 crores of box office collection, according to actor Vijay fans. The ensemble cast of the film attracted wide audience to the theatres. Having actor Vijay in double action, the film had a bunch of high profile stars in the supporting roles. The cast includes Nayanthara, Yogi Babu, Anand Raj, Jackie Sheroff, Daniel Balaji, Kathir, Amritha Aiyer, Vivek, Indhuja Ravinchandran, Varsha Bollamma, Rebecca John etc.

The 3 hour long film revolves around a youngster who is an aspiring football player, diverts himself from his dream to take revenge of the murderers who killed his father. He then forms a women football team to achieve his father’s dream of providing an identity to his slum through excelling in football game.

On seeing the film getting ignored by the juries of the National awards, a twitter user named Kartik Dayanand wrote “Any movie with Vijay in it will never win any national award as long as the current government is in power.” A Vijay fan with 30K followers in Twitter said that talent and hard work are being ignored while films that are made of caste and by “Sanghi” supporters are getting highly recognized.

Any movie with Vijay in it will never win any national award as long as the current government is in power.

Some of #ThalapathyVijay films deserve National Award as Kaththi,Bigil, Sarkar. All the government Against Thalapathy Vijay that’s why we are not nominating in any National Award

But Rise Above Hate Thalaiva 🔥🔥

#Bigil so many changes in women’s life after this movie.
To every women this movie gives a hope . pic.twitter.com/wne4PyK07D