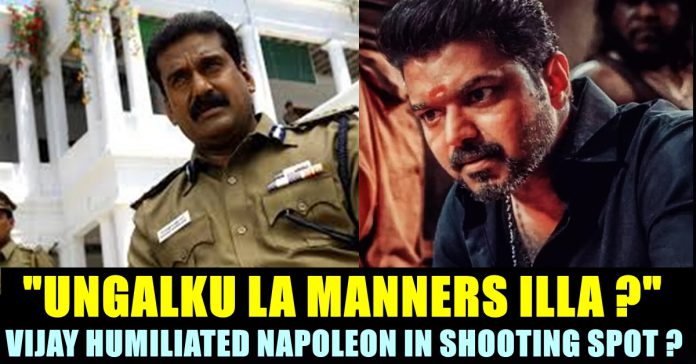 Movie journalists of Valaipechu youtube channel who are known for providing news and informations about Kollywood film industry, came up with a buzz saying that one of a top four leading heroes in Kollywood disrespected actor Napoleon during the shooting of a film in which they both acted together.

Veteran actor Napoleon who has acted in more than 150 films across South Indian film industry, also served as the Minister of State for Social Justice and Empowerment in Indian Prime Minister Manmohan Singh’s cabinet. In this video, Team Valaipechu shared an incident where the actor got humiliated by a leading actor in Kollywood.

Andhanan, one of the journalist explains the incident that took place years back, to his two and half followers. “Napoleon’s few of the friends from abroad are ardents fans of this particular actor it seems. Napoleon acted with that actor who has a huge market in Tamil film industry. He is one of four, five top actors of Kollywood. Napoleon accompanied his abroad friend to the shooting spot of the actor to help him capture a photo with the top actor.” Andhanan starts explaining about the incident.

“Now, the hero is in his caravan. Napoleon who had a good bonding with this hero, opened his caravan door straight away to contact him. At that time, a boy who was there to keep guard, confronted Napoleon and started to have a verbal spat with him. Napoleon who felt humiliated in front of his friend, tried to beat him up. The hero who stepped out of his Caravan, instead of questioning the boy, started questioning Napoleon which left him more humiliated. He asked him whether he has basic manners or not and locked his Caravan door” Anthanan said in the video. “Napoleon controlled his anger and left the place with his friend” he added.

As soon as the video uploaded, speculations started surfacing from the followers of the youtube channel in vast number. Many of them said that it could be Rajinikanth or Kamal Haasan who acted with Napoleon in Ejamaan and Virumaandi respectively. But many of them said that the actor who humiliated Napoleon was Vijay during the shooting of “Pokkiri” which was released in 2007 Pongal. In the film Napoleon acted as a honest Police officer.

However, Andhanan himself cleared the air in one of his next videos. He confirmed that the actor is Vijay while talking about why Vijay couldn’t be reached during this Corona outbreak. Watch the video below at 9th minute :

Actor Vijay who is known for his huge fan base in Tamilnadu, has acted in 63 films so far and is waiting for his 64th film “Master” to be released after this Corona outbreak. It is widely believed that Vijay is the most humblest actor in Tamil film industry who hardly talks to his co-stars in his shooting spots. Do you think Vijay could have done something similar to what mentioned in the above videos ?? Comment your views below !!