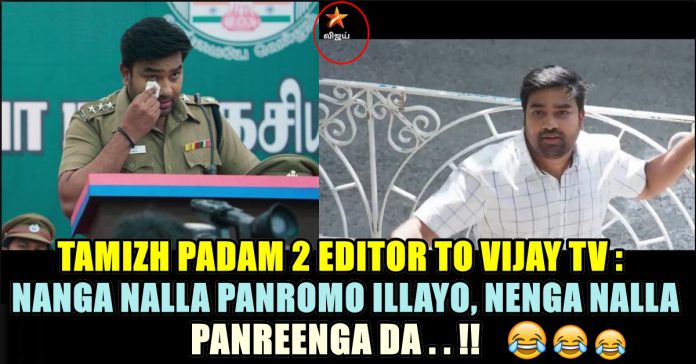 The prequel Tamil Padam was rollicking laughathon and if this brilliant teaser is anything to go by, we have a worthy sequel in hand. Tamil Padam starred Mirchi Siva, Ishwarya Menon, Sathish, Manobala amid others. The film is being bankrolled by Y Not Studios. Tamizh Padam is a franchise which is directed by C.S Amudhan. It is released in theatres few months ago. Their 40-second teaser made us ROFL. In Tamizh Padam 2, the makers trolled several politicians and big wigs of Tamil cinema. Right from Rajinikanth to Ajith, the makers did not spare anyone. In the film, there are references of Tamil films like Vijay Sethupathi’s Vikram Vedha, Ajith’s Vivegam and Mankatha and Vijay’s Mersal and Thuppaki and Rajinikanth’s Kabali. Twitter is cracking up with the way the makers have trolled Kabali and Vivegam in this one. The film released and became a blockbuster in all centers. Almost every fan of Tamil cinema enjoyed the film as it trolled the rival of their favourite actors. Some repeatedly questioned the director when Tamizh Padam 3 going to kick off. The director earlier answered them that the film will not start within 8 years.

Apart from movies that acted as prey for this “parody” there are lot of “political” moments that are brutally trolled in the second part.
Meanwhile Vijay Televiision earlier announced that they got the Satellite rights of this hilarious parody movie through twitter.

Now Vijay Tv decided to stream the movie on Vinayagar Chathurthi which is day after tomorrwo. They now telecasting promos as of they do for every new movie’s that is going to be telecasted.

On seeing one of the promos which streamed in the official twitter account of the channel impressed the original editor of the movie itself. Their exaggeration in the promo even made him a little embarrassed.

Check out the promo which grabbed the attention of T.S Suresh :

Even the director C.S Amudhan shared the tweet of his editor in a way of reminding his followers about his film’s streaming in Vijay Tv.

And it did not end there. Vijay Tevelision’s official twitter handle replied to his tweet as well. They commented the GIF of Vadivelu in Maruthamalai movie where he will laugh like a innocent baby after stealing food.

What do you think on this funny conversation between the small screen and silver screen. Let us know by commenting below !!