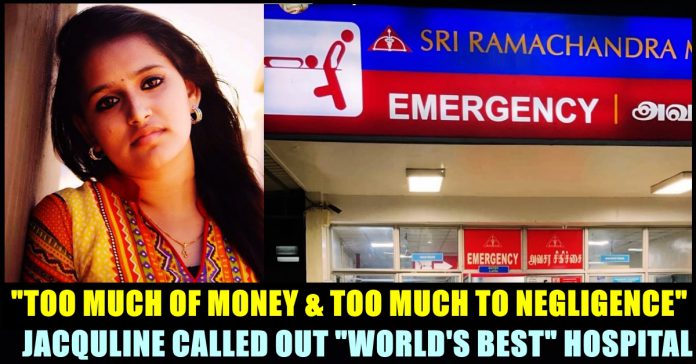 Television anchor cum actress Jacquline called out “world famous” hospital through her Instagram handle based on the recent experience she seemingly went through. Posting a picture of an emergency ward of a hospital named “Sri Ramachandra”, Jacquline said that she had worst experience visiting there. The actress expressed her disappointment over the approach of the hospital management. She who felt neglected by the hospital authorities, also mentioned about the expense one has to spend to get treatment from the hospital. Jacquline said that “they don’t even hear what you are trying to tell them” through her Instagram handle where she enjoys 1 million plus followers.

On Thursday night, Jacquline came up with a post in her Instagram handle calling out a “world’s best” hospital. Expressing her dejection over being unheard by the hospital authorities, Jacquline said that people are visiting hospital only to feel better. “No matter how much you are suffering from illness, they don’t even hear what you are trying to tell them” she said by adding that the expense of the hospital is high but the attention they are giving to their patients is low.

“Worst experience best hospital in the world nenga evlo mudiyalanu ponalum they don’t Even
hear whaturtrying to tell them.. people believe tht they can be better when they go to hospital
Too much of money and to much of negligence” read the Instagram story of the “Kolamavu Kokila” actress. Also Read : Jacqueline Replied To Those Who Trolled Her As “Nippon Paint” !!

Comment your views on this story uploaded by Jacquline against “Sri Ramachandra” hospital !!