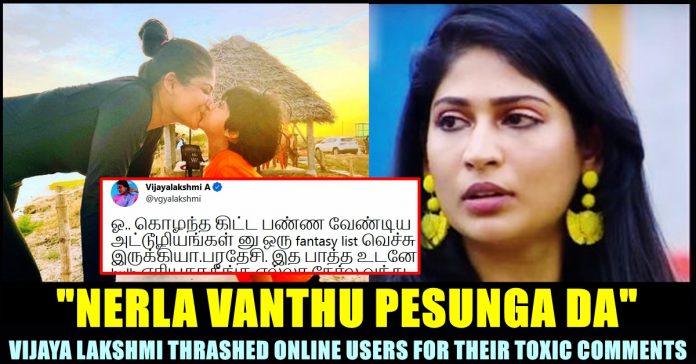 Tamil actress Vijayalakshmi who is pretty much active in social media platforms, recently uploaded a picture with her son in her official twitter account. The adorable picture which showed the mother and son duo expressing their love by kissing each other, received a sum of positivity from her twitter followers. However, a number of regressive comments from were also surfaced in her post. Reacting to such comments, the actress came up with a tweet expressing her frustration over it.

The actress who born to legendary filmmaker Agathiyan, got married to filmmaker Feroz in the year 2015 and couple gave born to an adorable child and named him as “Nilan”. After her acting stint in Tamil film industry, Vijayalakshmi began acting in a Sun TV serial named “Nayagi”. After that, Vijayalakshmi took part in the Kamal Haasan hosting Bigg Boss as a wild card contestant and ended up the show as second runner up.

She who is running a youtube channel, is busy uploading posts in her official social media platforms as well. Most recently, Vijayalakshmi came up with a post in her Twitter handle which showed her kissing her son. “Mummay… I love you .. bigger than Jupiter!!” caption of the post read.

Along with many who uploaded positive comments, a user said that such activities are followed in foreign culture. When another follower said that Vijayalakshmi looks like a Tamil girl, the user replied back saying that the actress is a mentally unstable personality.

These comments grabbed the attention of the actress herself who couldn’t resist giving them a fitting reply. Replying to him, the actress asked “Do you have a fantasy list on what to do and what not to ? Is there any bulb lightens while seeing the picture. You people come and talk to me in person. Disgusting creatures tweeting like intellectuals” Vijayalakshmi vented her emotions out.