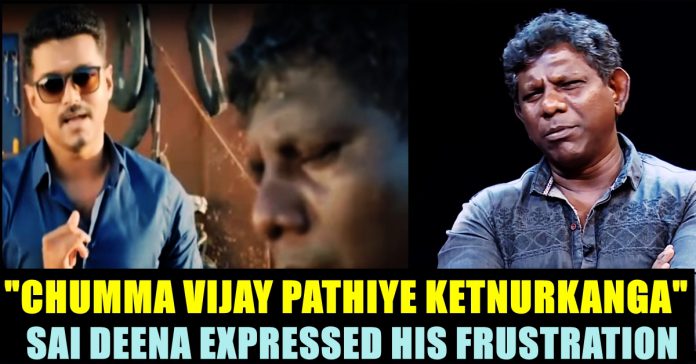 Villain actor Dheena debuted through Kamal Haasan’s Virumandi in which he played a role of a jail warden. He got highly acclaimed for the role he played in the Ulaganayagan’s directorial. Followed by that, he was highly recognised for his performance in the film “Aranya Kaandam” which got national award. In the film his appearance and the way he delivered dialogue gained him more film. He became a familiar face once he done a role in Rajinikanth-Shankar’s Enthiran. After that he appeared in many films including a few films of actor Vijay.

The actor, in one of his recent interview, expressed his frustration regarding the flaws in the society we live in. Starting from the death of 17 people in Coimbatore due to rain-related house collapse to the caste discrimination that occurs in rural part of state Tamilnadu, Dheena expressed his thoughts on several issues. Many who saw the interview surprised with the gesture of the villain actor and lauded him for the concern he shows towards the oppressed people.

However, he even revealed how every media house is treating him after inviting him for an interview. He says that he was not let by several houses to express his views and thoughts regarding the issues that are taking place. “When I try to speak my heart out, they are saying that it will create a problem. Then why should I give an interview?” he asked the media houses which restricted him.

When the interviewer asked him why he is not appearing in many interviews as he did before, Dheena started talking about the issue he is facing for past few days. “When start answering to the issues that occurs in the society, they demand me to talk on different topic. Do I have to attend interviews to praise high profile actors?” Dheena asked.

“One of the other reason is, they are asking the same questions in every interview. Say for example, I had acted with Vijay anna in Theri. They would always be asking questions regarding that. I have already told everything about Vijay anna. What’s there to tell more ? He is super, that’s it. But they will be repeating the same question.” said Dheena who added that he didn’t like them repeating the question related to his entry into Cinema Industry.

Watch the video of his interview below :

In the interview, the actor spoke highly of the youngsters of North Chennai. For trolling “Pullingo” in memes and videos, Sai Dheena asked them to comment on Vijay Mallya who cheated 9000 crores of money. The actor strongly registered that he cares for humanity the most.

Comment your views on the opinions of Sai Dheena !!