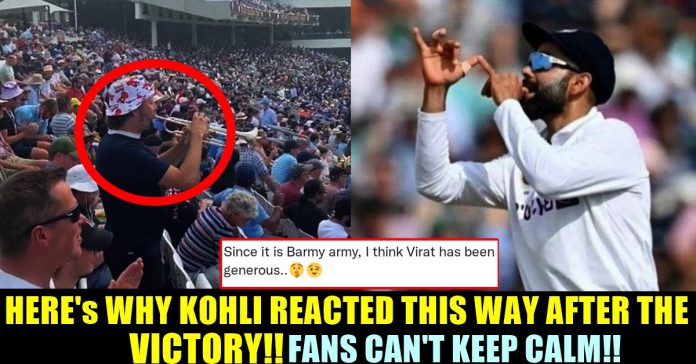 Being put into a tough situation after losing the third test match against England, Virat Kohli has made the wind blow aiding him. India won the fourth test match. Virat Kohli has posted a tweet to the fans triumphantly after winning yesterday’s match.

India Versus England Test Series has become a rivalry more than a match. Lots of criticisms started coming in the way of the Indian captain Virat Kohli after losing the 3rd test match. R Ashwin was excluded from the 4th test match at The Oval. This made people and cricket experts lambast heavily on Virat Kohli for the exclusion of the player who can be a great asset to the team at the specified venue. Many lost their hopes of winning the 4th Test match. However, contradicting people’s views India finished it off victoriously.

Fans were cheerfully celebrating the England team hoping there are going to win this match again.

Tricky period after lunch but as always still backing the team 💪#ENGvIND pic.twitter.com/UYcGWLQKpF

Virat Kohli posted a tweet saying, “Tough situations build strong people. Onto the next one.”

Tough situations build strong people. Onto the next one. #TeamIndia 🇮🇳💪 pic.twitter.com/fJx8A240MS

Virat Kohli made gestures in the stadium showing off his pride in winning the match amidst all the chaos after the third test. This is a message not only to the audience in the stadium but is for all the criticisms made on him. And this was posted by a fan in the comments of Kohli’s tweet.

Kohli is one of the greatest test captain ever, domination at home, winning & fighting at overseas. Our captain, our pride, VIRAT KOHLI.♥️pic.twitter.com/xNeAQZviD8

Many have been congratulating the captain on winning the match.

“With proper guidance about fielding and bowling from Rohit Sharma from outside the field, you finally managed to win this one easily. Congratulations Virat!!” says Johns.

Chloe-Amanda Bailey has tweeted, “Brilliant. Damn brilliant. This team won’t be forgotten easily that’s for sure!”

Writing a legacy as a Test captain with all overseas Test wins, this will lead to more greatness in Indian Test cricket history in future.

Shane Warne said Virat Kohli has the respect of the whole team, whole Indian team play for Virat Kohli. He has given the belief to win everywhere in the world. Long live Virat Kohli for Test cricket.

Warne said “Virat Kohli is the biggest superstar of this game on the planet. pic.twitter.com/FCyuRoNH3a

With proper guidance about fielding and bowling from Rohit Sharma from outside the field, you finally managed to win this one easily. Congratulations Virat 👍

Bow down to the KING pic.twitter.com/rP14Yi5Xkd

We are blessed yo have the strongest leader like you king. Congratulations for this GOAT victory. You deserved this day more than anyone else king. All the hard-work is paying of now. We love you GOAT. You are my whole world. King 👑🙌 pic.twitter.com/B0yCGmzLQs