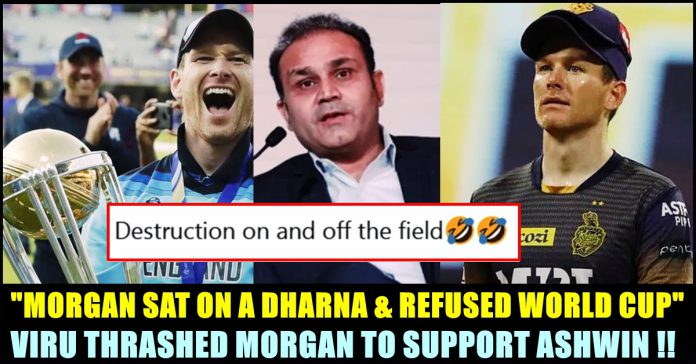 Former Indian opener Virender Sehwag’s tweet on the recent Ashwin- Morgan issue is going viral among the users of micro blogging social media site as the cricketer trolled the English captain for his contradictory behaviour in the finals of World Cup Tournament and in the match that took place between Kolkata Knight Riders and Delhi Capitals. The former cricketer who is known for his witty take on every happening, sarcastically trolled Eoin Morgan saying that he refused to hold the World Cup Trophy on 14th of July, 2019 after his team won due to a controversial rule.

In the match that took place between Delhi Capitals and Kolkata Knight Riders on Tuesday, a verbal spat took place between ace spinner Ravichandran Ashwin and England Captain Eoin Morgan over Ashwin trying to get the second run after the ball hit the pads of his partner Rishabh Pant. Initially Ashwin had a conversation with bowler Tim Southee and the conversation turned argument after Eoin Morgan intervened to exchange words with the Chennai born spinner.

“At the moment, I am happy that I played peacemaker and things have come to a good standstill right now” Karthick said in a virtual press conference. Later the match, when Morgan came in to bat, Ashwin got him out for a duck and celebrated the wicket in an aggressive manner. Watch the video below :

Reacting to the statement of Dinesh Karthik, Virender Sehwag came up with a tweet in his official twitter account. The latter, referred to an incident that took place in the final over of World Cup finals. Team England were awarded 4 runs after the ball which was thrown from a deep fielder hit the bat of striker Ben Stoakes and touched the boundary. The four runs helped England to life the trophy in a huge way.

Mentioning about the same, Sehwag, in his tweet, wrote “On July 14th , 2019 when it ricocheted of Ben Stokes bat in the final over, Mr Morgan sat on a Dharna outside Lord’s and refused to hold the World cup trophy and New Zealand won. Haina ? Bade aaye, ‘doesn’t appreciate’ waale” to troll the English captain who is currently captaining Kolkata Knigh Riders.

On July 14th , 2019 when it ricocheted of Ben Stokes bat in the final over, Mr Morgan sat on a Dharna outside Lord’s and refused to hold the World cup trophy and New Zealand won. Haina ? Bade aaye, ‘doesn’t appreciate’ waale 😂 pic.twitter.com/bTZuzfIY4S

With many laughing out loud for the sarcastic tweet of the cricketer, Sehwag also received criticism for his tweet. Check out some of the reactions his tweet received below :

Ashwin intentionally took butler out in 2019 IPL
Ashwin took the second run intentionally
Yes BCCI is powerful and very great at administration but that doesn't mean the status quo is maintained by doing what ever it does!!!
We love India we love Indian tolerance and ethics

It should have never gone to England.

Mr. Sehwag, the ball ricocheted of Ben’s bat, was declared as a boundary by the umpire. There was no deliberate attempt by stokes to take advantage then. Here, Ashwin tried to take (unfair) advantage and tried to sneak in a run. There is a difference between intent and accident.

Exactly my thought. English cricketers are hypocrites. The way @ECB_cricket won that world cup, it wasn't in the spirit of the game. Let's start from there. @ShaneWarne @MichaelVaughan @ashwinravi99 @virendersehwag @bhogleharsha https://t.co/ItejU4ETM8

Destruction on and off the field🤣🤣 https://t.co/yAjmwH2ODg