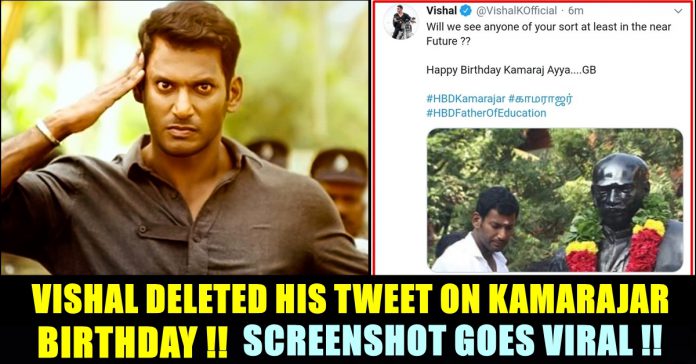 Actor Vishal who tried to file nomination in the late chief Chief Minister J. Jayalalithaa’s RK Nagar constituency, has posted a birthday wishes tweet praising former Chief minister late Kamarajar and deleted it immediately. He posted another tweet praising the political leader by rephrasing his statements. However, screenshot of the deleted tweet is doing rounds in the micro blogging social media site.

Vishal who entered Tamil film industry as an assistant director by assisting action king Arjun in his “Ezhumalai” movie, debuted as a protagonist through 2004 film Chellame. He went on to act in several other films as protagonist and formed as an action hero among Tamil film audience. He who got caught in number controversies in recent times, is currently busy in completing his upcoming projects in Kollywood film industry. The actor launched his production company in the year 2013 by producing his film “Paandiya Naadu”.

Vishal was elected as the General Secretary of the Nadigar Sangam in October 2015 after initiating a movement against the previous committee. He was expelled from Tamil Film Producers’ Council (TFPC) for remarks against the council. Later in April 2017, he won the election and got elected as President of Tamil Film Producers Council. He is also known for his anti piracy activism.

Today, on the 118th birthday of former chief Minister Kamarajar, Vishal posted a tweet praising him through his official twitter account. “The MAN who brought the Mid-Day Meals scheme….Till date we still miss U Happy Birthday Kamaraj Ayya….GB “ Vishal wrote by adding a picture himself with the statue of the leader.

The MAN who brought the Mid-Day Meals scheme….Till date we still miss U

However, the actor thought of something else as caption initially it seems. In the deleted tweet, Vishal questioned if there would ever be anyone as good as K Kamarajar in the near future. The actor took a sly dig at current political leader it seems. However, he deleted the tweet within few minutes and reposted it with new set of words.

“Will we see anyone of your sort at least in the near future ??” asked Vishal. Due to the lack of edit option in Twitter, the actor was forced to deleted the tweet after his change of mind. However, the screenshot was captured by the fans.

The reason behind this activity of Vishal is unknown. It is widely speculated that he deleted it to avoid controversy as seniors of his own industry are aspiring to be the chief minister of the state in future. On the work front, Vishal is all set to appear in “Chakkra” next and is also directing the sequel of his previous blockbuster “Thupparivalan”. Both the projects are expected to be released in big screen post lockdown.