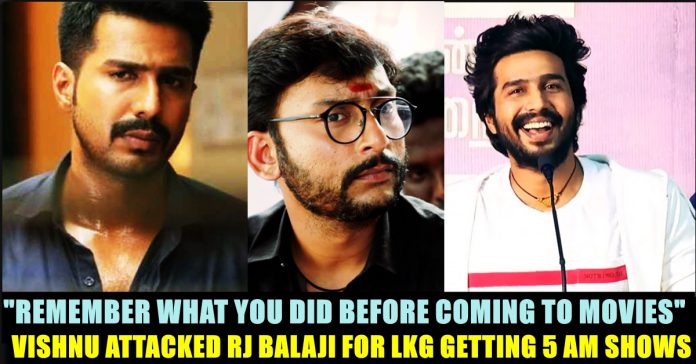 RJ Balaji’s debut film as protagonist got early morning 5 AM shows in some of the primary theatres in the city. LKG is a political satire gearing up for it’s release on 22nd of February. Some of leading theatres in Chennai decided to screen early morning special shows for the film. Initiated by Rohini theatre, now the film also got special show in Porur GK Cinemas. Kasi theatre also planning for 5 AM show says reports.

Meanwhile actor Vishnu who is one of the leading emerging actors in Kollywood expressed his disappointment over the early morning shows LKG is getting. In his tweet he said “5 am show losing its value:)its becoming a gimmick:(“

5 am show losing its value:)its becoming a gimmick:(

Responding to this tweet RJ Balaji posted a screenshot of his conversation with a theatre authority where he says that these special shows are completely based on the expectation from the audience not through the influence of distributors and producers.

Posting this screenshot, Balaji in his tweet said that he himself thought that it is a gimmick as Vishnu said but he did not mentioned his name. Balaji’s tweet read as “Even I thought this 5am show for LKG is a gimmick, apuram theatre owner kitta direct ah kettu confirm pannikittane… We didn’t get a recommendation seat but a MERIT seat ! Now put this to rest and rest well. 😎😆🙏
#RespectOthersWorkYoullGetUrs”

Even I thought this 5am show for LKG is a gimmick, apuram theatre owner kitta direct ah kettu confirm pannikittane… We didn’t get a recommendation seat but a MERIT seat ! Now put this to rest and rest well. 😎😆🙏#RespectOthersWorkYoullGetUrs pic.twitter.com/r9yN9fjfSc

As Vishnu deleted his tweet. Here’s the screenshot of it :

Following this Vishnu Vishal posted a series of tweets against RJ Balaji which left everyone shocked. Check out them here in order :

First learn to respect ppl around u..i dunno if u rembr wat u did before doin movies n how much u respctd actors bak then:) learn to giv credit to evryones hard work n not just urs..im gettin my due..im happy im not using people’s sentiments time n again to get success:)#rspctall

When u knw to criticise whole heartedly irrespecitve of the hardwork others hav put in and irrrspcrive of knwin wat d truth is, learn to accept criticism whole heartedly as well…its not just u whoz workin hard..infact ur route to fame is ‘personal criticism route’ 🙂

Guys i just wantd to show u all the reaction…thats all..n its clear n evident to all..:) been wanting to show d true side for a long time now:) ‘unukku vandha raththam,yenuku vandha thakkali chutney aa??’ my twitr frnds who knw me knw i wont talk unnecessarily 🙂#restupall

Im really happy for all small to medium budget movies gettin mornin 5am shows…really great for cinema..but am not happy abt certain people misusing n misguiding public all the time in the name of constructive criticism🙏good day all💪 RJ Balaji, in a way of responding to these tweets posted a video and trolled Vishnu Vishal indirectly :