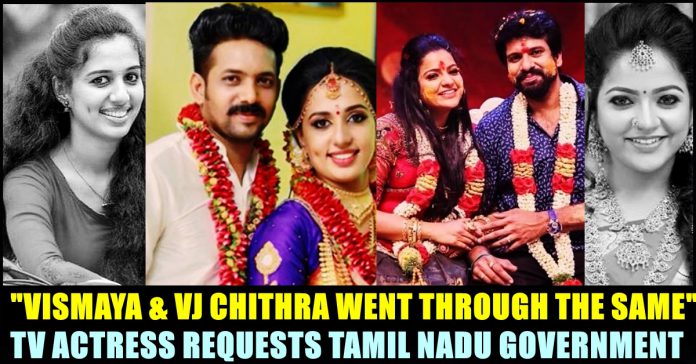 TV actress Rekha who is known for appearing in Tamil television serials and anchoring shows in Channels, came up with a post in her official Instagram handle, comparing the deaths of VJ Chithra of “Pandiyan Stores” fame and Vismaya, a Kerala based girl who recently killed herself due to “dowry” demand. Rekha, in her post, said that Kerala government and important officials of the state including the Chief minister are investigating the death of Vismaya in a keen manner to get the culprits punished. She who felt that the previous Tamil nadu government didn’t handle the case of Chithra well, expressed her expectation over the current government on punishing the criminal legally. She also said that the parents of Chithra are not as bold as the parents of Vismaya in her post.

Demise of Vismaya, a 24 year old Ayurveda medical student who lived in Kerala left the entire country devastated. She died by suicide in the bathroom of her husband’s house at Sasthamkotta district in south Kerala due to dowry demands. The incident sparked huge outrage among the public with various awareness campaigns emerging against dowry demands.

Vismaya’s husband Kiran Kumar who is working as an assistant motor vehicle Inspector and his family members harassed her and physically tortured her over dowry. As soon as the victim found dead at the residence of her husband, Police arrested Kumar and charged him under section 304B of the Indian Penal Code (dowry death). Based on the complaint of the victim’s family, Kiran was taken into Police custody.

Relations of Vismaya accused Kumar and his family members of beating, mistreating and torturing Vismaya in her in-law’s house. It has been revealed that Vismaya sent a series of Whatsapp messages to her family members informing them about the harassment she was suffering from Kumar. The relatives alleged that Vismaya shared the pictures of the wounds she suffered during the recent severe physical torture from Kumar.

Vismaya, in her chat, revealed that Kumar was upset over the car he was gifted by her father and used to thrash her over the disappointment. Vismaya said that she was dragged by her hair and stamped on the face over dowry. Kumar verbally abused Vismaya’s father for gifting a car he didn’t like. He repeatedly said that he deserve more dowry according to his stature but got only very little.

According to reports, Vismaya’s father Thrivikraman Nair claimed that their family had given 100 sovereigns of gold and over one-acre land, besides a car worth ₹10 lakh car as dowry to Kumar during their wedding in 2020. “He did not like the car but wanted Rs. 10 lakh cash instead. He beaten Vismaya in front of us after coming to our home at midnight last January” father of Vismaya said to the media. Most recently, Kiran Kumar, the accused in the case was denied bail in the Kollam court.

During December 2020, Tamil television actress Chithra was found dead in a hotel room in Chennai. The actress’s fiance Hemnath was suspected of abetting Chithra to commit suicide and was arrested by the Police for the same reason. Many, including Chithra’s mother believed that Hemnath could be the reason for the actress’s death. Now, Television actress Rekha who was also a close friend of Chithra, came up with a post in her Instagram, comparing the deaths of Chithra and Vismaya.

“Similar incident was happened for both Vismaya Nair and Chithra. Kerala Police, important authorities, ministers and even Chief minister of the state are investigating the death sincerely. During previous ruling, the case of Chithra concluded without any discussion. Parents of Chithra are not as bold as the parents of Vismaya as well.” said Rekha in her post.