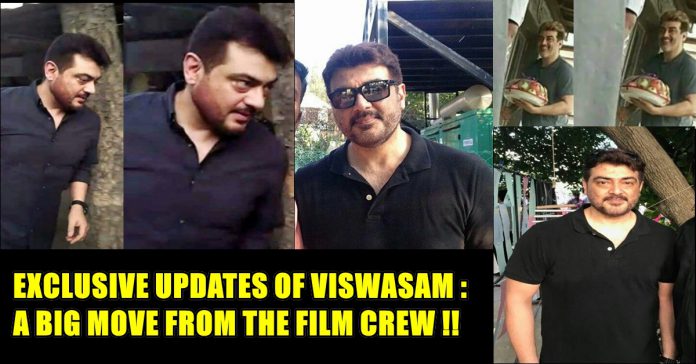 Thala Ajith Kumar and Siva are once again joining hands for the much-awaited ‘Viswasam’. In fact, the film was supposed to go on floors earlier in March. However, the shooting got subsequently delayed due to the Tamil Films Producer Council strike.

The project, to be bankrolled by Satyajothi Films, features Nayanthara as the leading lady. The project marks the fourth consecutive collaboration of Ajith and Siva. Ajith, who popularised the salt-and-pepper look in his last three outings, will dye his hair black and sport a new look for the film. In a first time collaboration, D. Imman has been finalised to compose music. He recently revealed that he’s thrilled to be part of the project. The rest of the cast and crew is unknown; however, it is rumoured that Shraddha Srinath might have bagged an important role. Viswasam will be made on a much lesser budget than Vivegam, which was a whopping Rs. 120 crore action spectacle. The project is gearing up for Deepavali 2018 release and it is believed that it will clash with the Vijay-Murugadoss film and Suriya’s next film with director Selvaraghavan at the box-office. If the three projects make it for Deepavali, it’ll be the biggest clash the industry would have ever witnessed. If Viswasam doesn’t make to the screens this Deepavali, then it will be a Pongal 2019 release. Unlike Suriya’s NGK and Vijay’s Thalapathy 62, which have already shot some portions of the film, Viswasam is all set to start from May 5. It has been learnt from reliable sources, as Kollywood limps back to normalcy after 48 days of strike, that the shoot of Viswasam will commence on May 5. The shoot will begin in a specially erected set in Hyderabad’s Ramoji Film City.