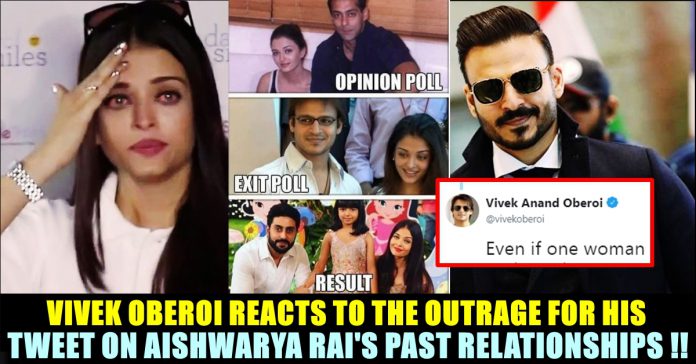 “Even if one woman is offended by my reply to the meme, it calls for remedial action. Apologies tweet deleted,” the actor tweeted this morning.

Even if one woman is offended by my reply to the meme, it calls for remedial action. Apologies🙏🏻 tweet deleted.

“Sometimes what appears to be funny and harmless at first glance to one, may not be so to others. I have spent the last 10 years empowering more than 2000 underprivileged girls, I can’t even think of being disrespectful to any woman ever,” he wrote.

Sometimes what appears to be funny and harmless at first glance to one, may not be so to others. I have spent the last 10 years empowering more than 2000 underprivileged girls, I cant even think of being disrespectful to any woman ever.

After his infamous press conference in 2003, there was practically a radio silence from the star of the 2000s, Vivek Oberoi. But he shot back to the headlines this year, what with having landed the lead role in PM Narendra Modi, the upcoming biopic on India’s Prime Minister and landing in a controversy right before the release of his film.

Vivek stirred up a hornet’s nest on social media on Monday when he shared a meme on the Salman Khan-Aishwarya Rai Bachchan affair. The crass tweet got him heavy flak from netizens and celebrities alike, who did not hold back from calling him “classless”. Check out some of the reactions for his apology :

#VivekOberoi
Women commission instead of seating in chilled AC room and sending letter to others should come on the ground and see the condition of women and discrimination done to them. Just targeting celebrities and sending letter is just a drama. Grow up guys.

It was just a meme. Those who understand are not offended.💕

Don’t care what you did with Adult and consenting females, but my only issue was dragging that child. Good that you realised and didn’t go by the faceless cheer mob who wanted to settle their personal score, through you.

Keep up the good work.

Graceful response. This controversy should be put to rest now.

Vivek will be soon in Narendra Modi’s biopic. The film “PM Narendra Modi”, directed by Omung Kumar B and starring Vivek Oberoi, was scheduled for release on April 11, the first day of polling of the seven-phased Lok Sabha elections. But it was stopped by the EC after complaints by political parties. It will now be released on May 24, a day after the completion of polling.

What do you think on this Apology from him ?? Comment your views below !!