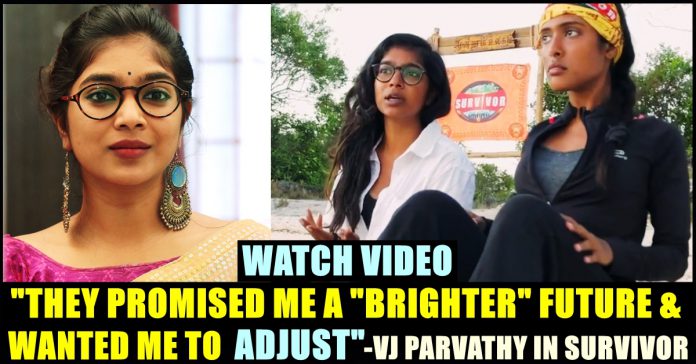 In the most recent episode of “Survivor” show, video jockey Parvathy and Gayathri shared about the troubles she faced as a woman in her life. She who got debuted as an actress through Hip Hop Tamizha’s “Saraswathi Sabatham”, revealed about the sexual invites she received from men since her college days. Expressing her frustration over men judging her for her clothes, job and questions she asks to public, Parvathi said that it is hard for her to get a groom and said that she is going to stay single forever. Gayathri Reddy, agreeing with Parvathy, said that she wants a simple, happy life but people are misjudging her through her social media posts.

VJ Parvathy has been grabbing a considerable amount of screen space, despite of the participation of some of the known cinema celebrities. In Friday’s episode, Parvathy opened up on the struggles she faced from men as a woman since her college days. She said that a man approached her to do “adjustments” in order grow faster, career wise. Parvathy who believes in growing step by step, says that she turned down the opportunity and added that she would have gone places if she accepted such offers.

While expressing her displeasure over men comparing her with Mia Khalifa, VJ Parvathy also shared about an incident where one of her neighbours tried to harass her during night time. He who knocked her door at 10 in the night, wanted her to adjust her vehicle which is parked in the ground floor while it was raining. After she moved her vehicle, the man tried to harass her and Parvathy reached her house within a blink to escape from him. In the morning, the man who was drunk at the night, apologized to her, Parvathy said.

Check out some of the reactions for this conversation between Parvathy and Gayathri below :

Gayathri nee vera level ma ❣️
what u both have gone no one should go through !
in this world some of man's brain's r so f..ked up 🤬 both of u overcome them n made name all by urself 🙌take a bow Gutsy n Bold ladies 🔥 https://t.co/xQtofDI5mq

@ZeeTamil please consider not showing useless discussion/talks #VJParvathy does when she gets the camera focus, show more of other teams whose giving interest into the show. Looking at her face and listening to her conversation literally wasting time 🙄😤😠😡 #SurvivorTamil

VJ Parvathy is not very different from Julie .. #Survivor

So far so good for VJ Parvathy in third world.
Techincally she can't gossip or backbite in a group of 2 🤣#SurvivorTamil