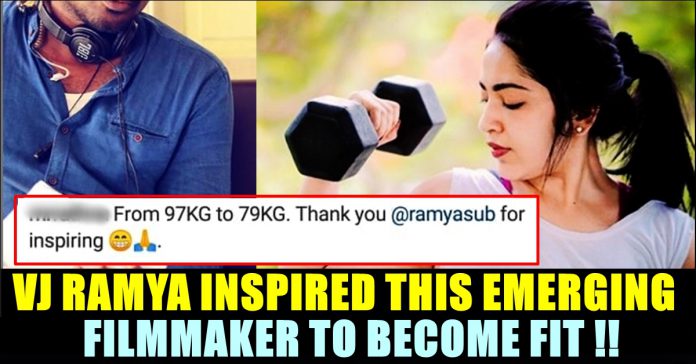 VJ Ramya who is known for hosting shows in Vijay TV, made her silver screen debut through director Rathna kumar’s “Aadai”. Now she has acted in the most expected film of the year “Master” under Lokesh Kanagaraj’s directorial who is a dear friend of Rathna who debuted through “Meyadha Maan”. Now the filmmaker has thanked Ramya for inspiring him to be fit in his official Instagram post.

After hosting several shows in Vijay TV, VJ Ramya started concentrating on her fitness which is evident through her official Instagram account’s timeline. The emerging actress constantly uploading the work out videos and pictures of herself to inspire her 10 lakh followers in the photo posting social media platform.

Check out some of her posts below :

It helps when the will is stronger than the skill . #BoxingTraining #SkillsThatIWantToAcquire

Rathna kumar who worked with her in both the films she acted, got inspired from her fitness goals it seems. The filmmaker posted a collage picture of himself and thanked Ramya for being an inspiration for him.

The first picture of Rathnakumar is from the Pooja ceremony of “Master” which commenced on the 3rd of October 2019. The second picture is from the audio launch which took place on the 15th of March 2020. Rathnakumar said that he reduced 18 kilograms in 5 months and thanked Ramya for inspiring him by tagging her. “From 97KG to 79KG. Thank you Ramya for inspiring 😁🙏.” read the caption of the filmmaker.

Rathnakumar has worked in “Master” as additional screenplay writer and also written dialogues. The film which is slated to release on April month has created huge expectations among the fans as the audio launch took place recently. In the launch both Rathna Kumar and VJ Ramya gave their speech in front of actor Vijay whom they consider as their biggest inspiration.

Comment your views on this transformation of Rathnakumar and Ramya being an inspiration for him !!