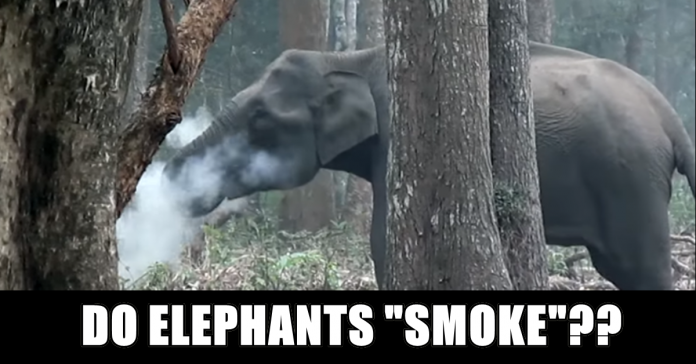 A Footage of a wild Asian elephant “smoking” in a forest in southern India has baffled wildlife experts, who say the behaviour has never before been observed.

It appears to be ingesting charcoal and blowing ashes in a burnt forest floor during the summer month of April, 2016. This unusual behaviour has baffled experts and scientists worldwide as this is the first such photographic or video documentation of a pachyderm smoking. It was recently shared and became the talking point amongst elephant experts, conservationists and wildlife enthusiast as it provides a new insight into wild elephant behaviour. The 48-second video shows the elephant picking up something with its trunk and putting it in its mouth, then blowing out a gust of smoke.

Interestingly Kumar and his colleague Shrikanth Rao were in Nagarhole as part of a long-term project of studying tiger and prey population. “We had just entered a partially burnt patch of the moist deciduous forests, when we suddenly came face to face with a female elephant standing calmly on the side of the road. This was not an unusual sighting, but what we saw her doing was something that I had never witnessed before, and it has probably not been commonly captured on film earlier either,” states Kumar.

Explaining what could possibly have been the happening, Dr Varun R Goswami, Elephant biologist and senior scientist with WCS India Program shared that most probably, the elephant was trying to ingest wood charcoal, as she appeared to be picking up something from the burnt forest floor, blowing away the ash that came along with it in her trunk, and consuming the rest.

“Unfortunately we are a country obsessed with tigers and even biologists working in premier institutes know that any study on tiger will get them better chance of funding and quick approval  from forest department and hence the focus on several key species like elephants and rhino is completely missing and very little is known about them,” said a biologist adding that he hoped that this video not only increases the interest of researchers but also that of Forest department.