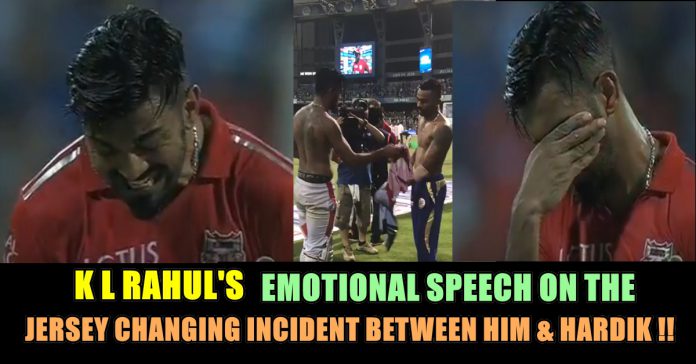 Kings XI Punjab wicketkeeper-batsman KL Rahul set the Wankhede Stadium on fire with a blistering 94 off 60 balls against Mumbai Indians in their Indian Premier League match on Wednesday. Despite his brilliant knock, the Ravichandran Ashwin-led team suffered a three-run defeat at the hands of Mumbai Indians. After the match, Mumbai Indians all-rounder Hardik Pandya and KL Rahul swapped their team T-shirts in front of the Wankhede crowd. With this win, Mumbai Indians boosted their tally to 12 with one game in hand. The Rohit Sharma-led side have jumped to the fourth spot on the points table.

The star of the match was Jasprit Bumrah who turned in a match-winning bowling performance with brilliant figures of 3 for 15 in his allotted 4 overs. His spell also included the crucial wicket of K L Rahul in the penultimate over. The unorthodox pacer ended Rahul’s stubborn stay when Kings XI Punjab needed 20 off 9 balls. Rahul was caught at long-off by Ben Cutting. Rahul, who batted brilliantly, struck 10 fours and three sixes in his knock. Here is the glimpse of emotional KL Rahul :

The defeat left Kings XI Punjab on 12 points with one game to go.

Post the match, KL Rahul was seen throwing his award towards a fan but one more incident happened that grabbed many eyeballs.

KL Rahul and Hardik Pandya were seen exchanging their jerseys which is never seen before in Cricket.

Talking about it, KL Rahul said-

“We’ve seen this happening a lot in football. Hardik and me are good friends and I felt like it would be nice to collect some jerseys and to bring that tradition in cricket as well. We didn’t speak about this earlier. As we were talking now he said ‘give me your jersey’ and he wanted my jersey so we exchanged it. That’s the beauty of the IPL. We play really hard, we play aggressive cricket and we all want to win the game. Even though we play 300 days of cricket together but these two months when we play IPL there’s no friendship once we step on the field. I want to take him down and he wants to take my wicket. That’s how the IPL is it’s just between me and him, all the 8 teams we compete very hard and that has what made this the biggest tournament in the world.”

Its one of the healthy incidents that fans ever witnessed in this IPL so far.