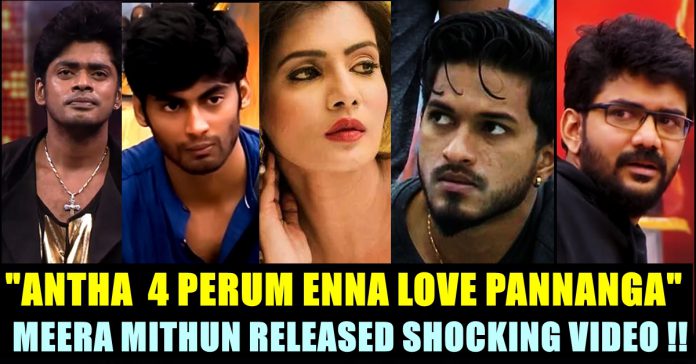 Meera Mithun who is grabbing the headlines for all the wrong reasons, has now posted a series of videos accusing the “We Are The Boys” gang. “We are the Boys” is a gang formed by the five contestants of Bigg Boss Tamil season 3. It consists of Mugen, Sandy, Tharshan, Kavin and Losliya and they spent their days inside the Bigg Boss house as a team.

Vijay Television conducted a separate episode, in a way of celebrating the “We Are The Boysu” gang. The episode was hosted by Rio Raj and Ma Ka Pa and was streamed on the noon of Sunday.

Being one of the most controversial contestant of the show, Meera Mithun sin her new video says that all the four men were interested in her during their 100 days in Bigg Boss house. She posted this video, in a way of replying to the “We Are The Boys” special episode where four of the boys made extreme fun of her.

Kavin, Tharshan, Sandy and Mugen who participated in the show trolled Meera Mithun for telling lies and exaggerating things while being inside the house. Later they trolled her for not having any movie opportunities after coming out of Bigg Boss house.

Now in this Meera Mithun thrashed four of them by saying that they all interested in her and wanted to make relationship with her. “In tamilnadu many people are making a life out of trolling me. Many people are eating food because of me. So there is no surprise that these four boys have joined that list. All the four men were always behind my back inside the Bigg Boss house but they didn’t have the guts to say it as their votes will reduce. Every boy was interested in me and they wanted to be with me and spend time with me. They even hidden their love for me as they feared to lose the relationship with other girls.” siad Meera Mithun.

Followed by that she posted another video accusing the boys by saying that they four are cowards. “They would stare at me and would wish to spend time with me but they had no guts to speak with me. After knowing the people’s support for me, they will come to me shamelessly.” At one point Meera Mithun even said that every boy in the BB house were interested in her and the girls couldn’t tolerate it.

In the following video, she even said that she is a famous person above all the celebrities in tamilnadu including the actors. “Knowing my fame, all those boys were fought with each other to ge me. ” she said.

What do you think on these videos of Meera Mithun ?? Comment your views !!