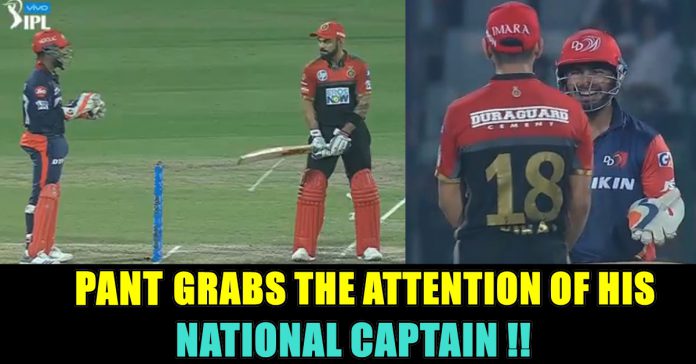 With the kind of rollicking form Virat Kohli is in this IPL season, there was nothing Delhi Daredevils’ bowlers could do to stop the Royal Challengers Bangalore’s run machine as he smacked a 40-ball 70 at the Feroz Shah Kotla on Saturday to propel his side to morale-boosting 5-wicket win.

In his trademark style, Kohli bailed RCB out of trouble after the visitors were reeling at 18-2 in their pursuit of 182. The Kohli juggernaut looked like he is on a full-blooded mission to get his franchise over the line in a do-or-die contest only for his Delhi-mate Rishabh Pant to catch him off guard. At the start of the seventh over of the RCB’s chase, Kohli’s mind deviated while he was taking guard against the bowler in what looked like a friendly banter from Pant behind the stumps. To which, Kohli turned back, gave his younger buddy from Delhi a long stare, smiled and got back in the mood to face the next ball from the bowler.

Pant was spotted clapping his hands and cheering for the bowler as is a routine affair for a man in gloves while Kohli prepared himself to face the bowlere. However, it looked like Kohli got irked by Pant’s chatter as the two exchanged smiles a brief chit-chat to get back to match action.

At the point of this funny incidence, Kohli was batting on 40 off 16 balls. And it looked like the friendly interaction eased the nerves for Kohli in the chase as he went on to score his 34th IPL fifty. In the process, he surpassed Suresh Raina to become the highest run-scorer in the IPL with 4884 runs from 160 games in the IPL as against Raina’s 4853 runs in 171 matches. Significantly, Royal Challengers Bangalore kept themselves relevant in the competition with a win against Delhi Daredevils on Saturday as they are still in the mix to stake a claim in the knockouts. DD, on the other hand, have been kicked out in the league stage,

The two local boys having a fun chat out there.