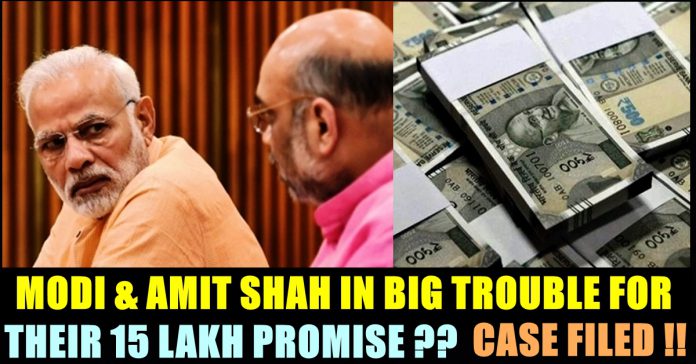 A case against Prime Minister Narendra Modi and Amit Shah has been filed in the court of Ranchi. The case is about the BJP leaders cheating people by promising them to credit 15 lakhs in their bank accounts. The complainant is an advocate at the state high court and he interacted with the media about the case which has Union Minister Ramdas Atwale as the third accused.

HK Singh, the advocate who filed the case has accused Prime Minister Modi and Amit Shah for cheating people by promising them to credit 15 lakhs in their bank accounts if they come to power. He registered case against them under sections 415 (Cheating), 420 (Dishonesty) and section 123(b) of the Representation of the People Act. The court proceedings in the case started on Monday and is scheduled to come up for hearing on March 2.

HK Singh pointed out a statement of Amit Shah in the year 2019. Amit Shah said that the government introduced Citizenship Amendment Law because it was one of their main promises in their election manifesto for the 2019 Lok Sabha election.

HK Singh questioned why the promise on CAA was delivered but the promise on crediting 15 lakhs in each person’s bank account was not honoured. The advocate argued that the Representation of the People Act says false promise cannot be made to seek votes.

However, a spokesperson of BJP party has said that it is merely a “publicity stunt”. “Filing a case after 6 years is just publicity stunt” said Pratul Shahdeo. “What BJP leaders promised is in public domain. They never promised to credit 15 lakh rupees for every bank account holders. They will understand the meaning of what we said if they read inbetween ,lines” he said to rubbish the allegation.

As soon as the case was registered by HK singh, the news went viral in the social media platforms and people started reacting to the news. They, for their part, posted hilarious comments to make fun out of the entire issue. Check out some of their reactions below :

Where is my 15 lakh? 😂 pic.twitter.com/mB7DYhsoZb

"Why was the promise on CAA delivered but the promise on crediting Rs 15 lakh in each person's account, a promise made in BJP manifesto, not honoured?" HK Singh asked.

RSS-BJP can't say it was not in the manifesto after #AmitShah on record had said it was a jumla! https://t.co/1kpmDJgJ0w