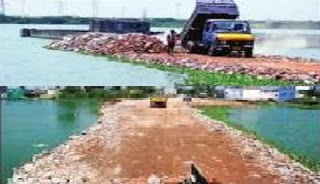 The great deluge of December, created in large part by land sharks encroaching upon the city’s water bodies, has prompted Greater Chennai Corporation to ask revenue department to resurvey nearly 40 acres of land adjoining the Pallikaranai marsh in Perungudi.

Experts and historians said dumping of garbage and encroachments reduced the Pallikaranai marsh -a vital con duit for rainwater as an aquifer to the city’s groundwater reserves and as part of an excess water discharge system, via the Okkiyam Madavu drainage outlet and Buckingham Canal, to the Bay of Bengal -from 6,000 hectares in the 1960s to 593 hectares by 2012.

On an apparently specious claim to have title deeds to the site, the association is brazenly dumping building debris on the natural water body that is home to 61species of plants, 46 species of fish, 112 types of birds, 21species of reptiles and seven types of butterflies.

Members of the body insisted that they have `patta’ or land deed for the land. However, both the corporation and forest department said they have no records that the association has any claim to the site.

The association has already dumped so much debris on the location that there is now a road on the water body .

“We got the patta from the government in 1966,” association member D Kumar said.”This land is not part of the Pallikaranai marsh. It is only waterlogged because of sewage from a nearby Metrowater pumping station.”

He said the association has written a letter to Metrowater o drain out water from the spot. Revenue department of icials, however, said they have not issued a land deed to anyone in Kallukuttai. “We have to check about this case,” an official said.

Corporation officials said here is no compound wall or other demarcation on the site.”We are not clear about the ownership of the land,” a corporation official said. “The orest department is also unaware of whether it is an ex ension of the marsh. We will decide on the course of action o take against the association based on the revenue department’s resurvey report.”

Ashwin Iyer, a resident of Kallukuttai, said the locality was worst-hit during the floods of early December.

“This private association came out of nowhere and installed a board claiming ownership of the land,” he said.

“If they do have the land deed as they claim, the government should investigate the officials responsible for granting it on this eco-sensitive area,” Iyer said.

Old-timers in the neighbourhood said 350 acres of land in Kallukuttai belong to Anna University , the forest department and defence forces but local politicians had divided the land and sold plots that became an unauthorised with around 5,000 households.

The locality does not have basic amenities including drinking water, sewage connections or roads.
“The condition of the slum is terrible when it rains but the government is not rehabilitating these families elsewhere due to the pressure from an influential local politician,” a resident said.

Residents said that the authorities have not learned any lessons from the floods. “Real estate firms backed by politicians are converting the ecologically sensitive zone into residential localities,” another resident said, adding the government should take action.