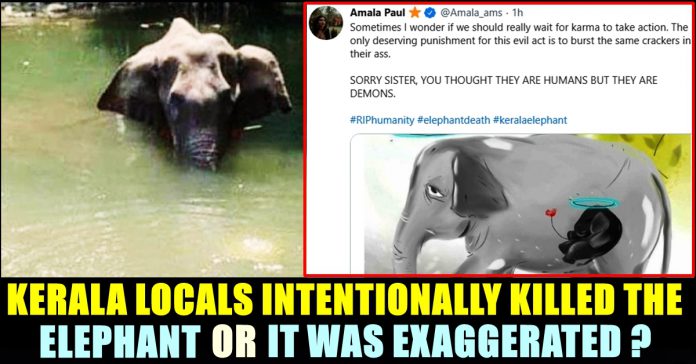 While 9 of 10 people believe that the locals of Kerala fed firecrackers filled pineapple to a pregnant elephant to kill it, The Mannarkkad Forest division in Palakkad has registered a First Information Report against unidentified persons. The 15 year old pregnant elephant died after a fire crackers stuffed pineapple bursted in its mouth. Public people and many of the influential personalities in country India including cinema celebrities and cricketers are slamming the locals who allegedly fed the pineapple. When actor Nakkhul cursed them as “Bastards”, actress Amala Paul wanted to burst the fire crackers in their asses. Similarly many people with highest number of followers made emotional statements against Kerala locals believing that they caused the damage intentionally.

Sometimes I wonder if we should really wait for karma to take action. The only deserving punishment for this evil act is to burst the same crackers in their ass.

Now, Mannarkad Divisional Forest officer, KK Sunil Kumar, while talking to The News Minute , has said that they (authorities) are assuming that the elephant fell prey to the explosive snare used to fend off wild boars. This statement from the officer makes us realize that no person is directly involved in this act. It is widely believed that a group of people fed the cracker filled pineapple to the 15 year old elephant to have fun. However, using snares to trap, wound or kill animal is a cruel practice, and it is punishable under the Wildlife Protection Act if people even try to do it.

Sunil Kumar further stated that people would usually use two-feet-high fences laden with explosives to catch wild boars, to prevent them from invading or from entering cultivated areas. When the boar goes near, its body pressure might explode the crackers which are strategically tied to the fences, said Sunil. In another illegal practice, animals like boars are killed for meat by people who makes them eat fruits with poison or such bombs. The officer stated that there is no evidence surfaced to conclude that the elephant was intentionally fed such an explosive. “In fact, we are also investigating if it bit a fruit laden with explosives or directly bit these snares” he added.

“The elephant injured due to an explosive. This is what we can say for sure now. We are investigating on who was behind it and what happened” said Surendrakumar, Principal Chief conservator of Forests and Chief wildlife Warden.

Mohan Krishnan, Forest officer who shared the pictures and narrated the details said “She trusted everyone. When the pineapple she ate exploded, she must have been shocked not thinking about herself, but about the child, she was going to give birth to in 18 to 20 months.” Even while bearing a searing pain, the tusker didn’t hurt any of the villagers, Mohan wrote. the Elephant died on 27th of May while standing it water despite of several efforts took by officials to rescue her. The Forest department has registered the FIR under relevant sections. Several hashtags such as “RIP Humanity” and “All lives matter” are trending in Twitter condemning people who are causing damage to other lives.