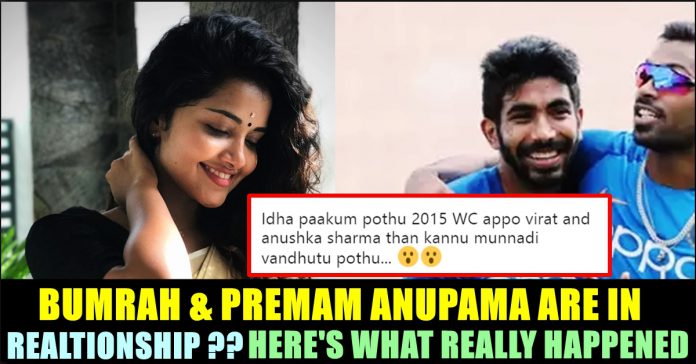 “Bumrah we know is a very good new ball bowler and I’m sure he’ll mix it up and bowl some short stuff and some full stuff,” said Ricky Ponting, former Australian Captain and Assistant Coach of the team ahead of today’s clash.

Bumrah who look two crucial wickets for India in the first match against South Africa is a key bowler for team India in this ongoing tournament. Jasprit Bumrah was a little bit of an oddity in cricket, with his stuttering bowling run-up and stiff-armed action, but he has now become one of the best in the business, more so at the business end of an inning, when he can bowl a sensational range of deliveries to keep the batsmen honest and the scoring rate down.

Now the recent buzz says that the 25 year old cricketer is being in relationship with the Kerala based actress Anupama Parameshwaran. Without any evident connection such as region, language or field of career both the celebrities started to follow each other in social media platforms and both of them liking each other’s post caught the attention of the Internet users who started spreading it.

Having followed by more than 10 lakh people in Twitter including Amitabh Bhachchan, Bumrah only follows 25 people and the only actress in the list is Anupama. Going by the report of Indiaglitz, cricketer Abhishek Sharma might be the mutual friend for them.

Check out some of the reactions from twitter here :

@Jaspritbumrah93 what are you doing man?
There are thousands of people to take care of Anupama Parameswaran! You should concentrate on taking wickets instead of liking Anupama’s photos, dont forget that you’re the best bowler in the world!!!!#bumrah💜#anupama

However, let us not conclude anything without the confirmation from the concerned people themselves?? What do you think on these reactions ?? Comment you views below !!