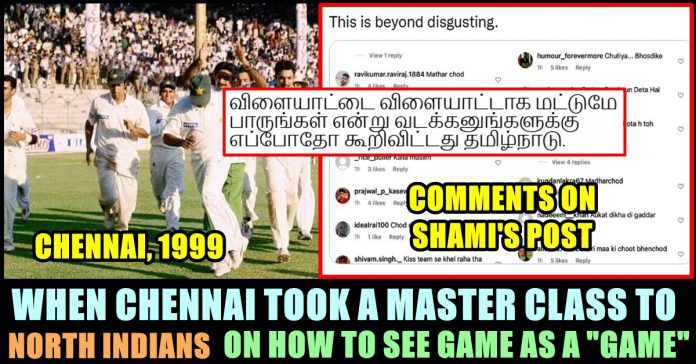 The hatred Indian pacer Mohammad Shami is facing after leaking runs in the first match of India in the ongoing T20 world cup turned ugly and led seniors cricketers such as Sachin Tendulkar, Virender Sehwag to raise voice to extend their supportive hand to Shami. It all started after fans from India flooded the comment section of Shami’s Instagram posts with abusive words.

Majority number of comments were written in Hindi language. Cricket experts and politicians has been advising fans to watch a game as game instead of taking things personally. Now, a video of Chennai crowd providing a standing ovation for Pakistan team to appreciate their effort when they defeated India back in 1999 is doing rounds in social media platforms.

These are comments under Shami's Instagram post.From the very beginning I predicted this would happen if India lost the match. pic.twitter.com/5v9rZN0Nzw

After losing the toss, India displayed a mediocre batting performance in the first innings. Both the openers failed to give a good start for India and Kohli managed to score a half century. He ended up scoring 57 runs from 49 balls and Pant’s 30 balls 39 helped team India to score 151 runs in the 20 overs they played.

Shaheen Afridi picked three main wickets of India which includes Rohit Sharma, Virat Kohli and KL Rahul. Pakistan openers Mohammed Rizwan and Babar Azam effortlessly chased the score down with 11 balls spare. Pakistan won India without losing a single wicket and broke the streak of 12-0 and made it as 12-1 as far as the world cup face offs of both the teams are concerned.

Mohammad Shami had an off day today and he is being abused by Indian cricket fans on his insta.

This is beyond disgusting. pic.twitter.com/SMNdnPVvAv

After India lost the match against Pakistan, Indian pacer Mohammed Shami has been facing the wrath of cricket fans who belong to north part of the country. His Instagram posts are being flooded with negative comments based on his religion. The cricketer conceded 43 runs in the 3.5 overs he bowled which helped team Pakistan to break the streak of 12-0 against India in world cup tournaments. Former and current Indian players including Sachin Tendulkar and Virender Sehwag came in to support the pace bowler. Even Politicians joined the cricket fraternity to condemn the targeting of religious identity by social media trolls.

Now, a video of Chennai crowd providing standing ovation for the Pakistan team is going viral across the social media platforms. Being India’s most sporting crowd, Chennai, in 1999 hosted a test match between India and Pakistan. The penultimate day of the test match saw India being bundled out for 258 while chasing 271 runs. The team lost the match without being able to add 12 extra runs.

Despite of the dejection, the Chennai crowd gave the arch rivals of India, a standing ovation. The incident became one of the best scenes to have emerged out of sports in India. Fans of the home team applauded the team that did best on the particular day. It served as one of the landmark event in the Indian cricket, and the cricketers, leaving jingoism on one side, showed the world how India appreciates sports. Now, on seeing Shami being subjected to online hatred, a number online users uploaded the video and said that it is a “Master Class” for north Indians on how should one treat a match.

Check out some of the reactions that emerged regarding the same :

This still remains iconic. Chennai crowd is everyone's favourite for a reason<3 https://t.co/dIFEi2MA42

I was in Chepauk that day as a kid heartbroken 💔on seein India losin closely after Sachin century but post stood up n appreciated the PAK team which won. Matured ppl ll understand that Chennai crowd loved the sport but Sanghis ll say that crowd loved Pakistan https://t.co/9GPpINgzes

This is how we have to behave in defeat.
Chennai crowd giving a standing ovation to Pak team.
This is Tamilnadu, the cultural capital of India. https://t.co/meElLjzk97

Cricket is a SPORT!
I stand with #MohammedShami and #TeamIndia
Good game by #Pak 👏🏾
Be like #Chennai crowd 👇🏾 https://t.co/tpkk1jCJRh