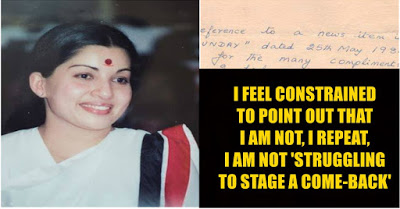 I wanted to be a lawyer. But circumstances made me an actor was Jayalalitha’s most known words. From what started in an accident led to her first lead role in Vennira Aadai. And the rest was history.

Being titled as the most successful film career 80 out of Jayalalitha’s 85 lead roles were hit. She paired opposite MGR 24 times. Her acting career spanned over 140 films in three decades which included casts from a childhood artists to one of the most beautiful and talented heroines of her time. Her role in the English movie titled The Epistle put shame to many veteran actors.

But right from her start to the politics she has turned down many film offers. Her statement was that her entry into film was due to mere circumstances and her financial position. And now due to her being well off she thought she doesn’t need any more film appearances. She states that she’s not willing to stage a comeback. She goes on to clarify that the opposite of Rajinikanth’s Billa was initially offered to her. But due to her declining the offer it was given to Sri Priya. 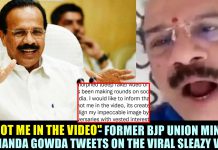