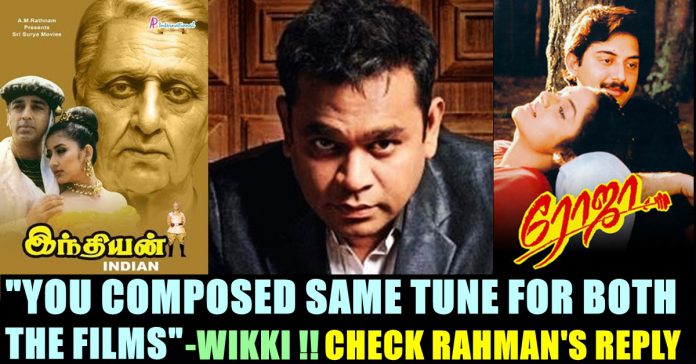 Months ago, Director Vignesh Shivan who is known for directing films such as “Naanum Rowdy Thaan”, “Thaana Searntha kootam”, interviewed legendary musician A.R Rahman and the duo conversed about many interesting ideas, incidents and the works did by the academy award winner throughout his career which lasts more than 25 long years. During the conversation, Vignesh Shivan mentioned about the popular song “Telephone Manipol” from “Indian” being played as a background score for “Roja” film. The loveable moment of Rahman replying to Wikki with a laughter is doing rounds in the social media platforms as a video compilation with the scene from “Roja”.

Being the only Indian musician to win the academy award, A.R Rahman is known for his cool and composed attitude. His calm attitude even after winning Oscar twice, is world famous. He is one of the most loved musician in the world and the people of Tamilnadu are very proud on the fact that he works predominantly in Kollywood industry.

Fondly called as “Isai Puyal” and “Mozart of Madras” by the people of Tamil nadu, Rahman is known for introducing new kind of music to his audience. Arguably, his “Petta Rap” from “Kaadhalan” is the first rap song in Tamil film industry and he also changed the dimension of Tamil cinema music through his skills. In this interaction, Vignesh Shivan, while showering his love towards the legend, impulsively discloses about one of his discoveries about the music Rahman composed in two of his films which are similar and also expressed his expectation of getting appreciated from him for finding it.

Rahman, in his debut film “Roja” of Mani rathnam, composed a background score for a scene that shows a traditional tamil ceremony where the groom meets bride in her home for the first time before their marriage. In the 1996 Shankar directorial named “Indian” which had actor Kamal Haasan in the lead, the music composed stretched it as a full length song and it became a huge hit as well.

“In “Roja” film, “Telephone manipol” song’s tune was used as background music for the “bride seeing ceremony” scene. This is what I found sir” said Vignesh Shivan to A.R Rahman to which the latter would reply with a warm laughter. “Correct, Yes, the scene will feature that tune” Rahman would nod. “Are you going to appreciate me ?” Vignesh further asked in a humorous manner and the Oscar winner could be seen laughing out loud.

It is notable that Roja got released in the year 1992 whereas the Kamal Haasan starrer saw theatrical release in the year 1996. The video is doing rounds in social media platforms with reactions appreciating the legendary musician for not getting offended and for not trying to defend himself. So far, A.R Rahman has composed and produced original scores and songs for more than 145 films in various languages, including Tamil, Hindi, Telugu, Malayalam, Persian, English and Chinese. His most recent work in Sushanth Singh Rajput’s “Dil Bechara” garnered positive reception from the fans across the country and the musician’s some of the upcoming works as “Ayalaan”, “Pathu Thala” etc.