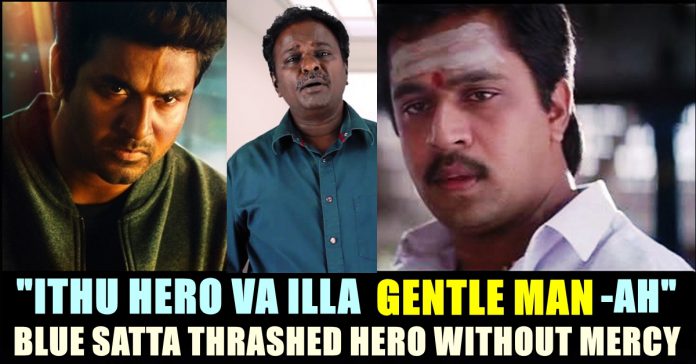 Sivakarthikeyan’s “Hero” movie released across the world yesterday. The film directed by “Irumbuthirai” fame P.S Mithran talks about the flaw in the educational system of India. Added with commercial elements, the film conveys a message to the students and parents of current generation.

Produced by KJR studios, the film has Abhay Deol and Ivana in prominent roles. The female lead is going to be played by Kalyani Priyadarshan, who is making her debut Tamil film with “Hero”. The Central Board of Film Certification awarded a clear ‘U’ certificate to the film. As soon as the trailer of the film released it reached millions of views in youtube.

As soon as the film released reviews are pouring from all the directions of social media. The film mostly receiving positive reviews from the general audience which didn’t stop Blue Satta Maaran from thrashing it. The reviewer who enjoys more than 10 lakh subscribers found flaws in this partly commercial movie.

The reviewer who is all set to make his directorial debut, said that the film looks like a sequel of Arjun’s Gentleman. The reviewer said that the film doesn’t give any solution to the problems it addressed. “Apart from pointing finger towards a corporate big shot, the film does not give any solution. There is nothing worth noticing in it as well” he said. “I feel very pity for those applauded for this kind of film” he added.

“The main reason behind the film being a boring one is the characters sketch. No character had a proper design, especially the protagonist’s. It looked like Sivakarthikeyan asked permission to Arjun to act while making the sequel of his earlier blockbuster Gentleman” the reviewer expressed his thoughts. “Even the hero role doesn’t even has the weightage carried by the role of Arjun” he said.

Blue Satta even said that the characterization of Villain and heroine was not so good. “The film is based on scientific inventions. The inventions they show in the film are so amatuer and it looked like they have took the audience for granted.” said Blue Satta who further trolled the rough note theory explained in the climax of the film.

On seeing this review from him, many fans of Sivakarthikeyan are expressing their hatred towards him. Being one of the prominent movie reviewers of Kollywood films, Blue Satta Maaran debuting as director and planned to elevate his film career to the next level. Suresh Kamatchi who was supposed to produce Simbu’s “Maanadu” is going to produce this movie of Maaran. Few of the fans of SK even said that they are waiting for his movie to get release to see his movie making skill.

Blue Satta caught in controversy many times for bashing films without considering the profile of actors or the directors of the movie. He had clash with the makers of many films often. “Goli Soda” Director Vijay Milton and Charlie Chaplin director Sakthi Chidambaram condemned him for the way he reviewed certain movies.

What do you think on this review of Blue Satta ?? Comment your views below !!