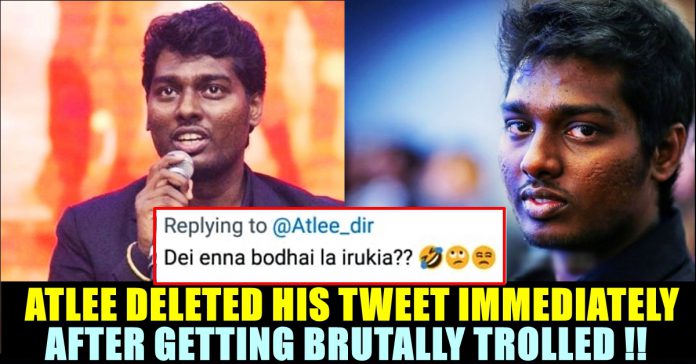 After a long time, Director Atlee logged in to twitter to give updates about his next project “Anthagaram”, in which he is one of a producer. Originally produced by Passion Studios, in association with O2 Pictures, Atlee is going to present the movie under his own banner A for Apple studios. The film which is going to have happening actor Arjun Das as one of a lead, was directed by debutant Vignarajan. The film completed more than a year ago and almost shelved due to lack of financial support. Now, due to the intervene of Atlee, the film is all set for a grand release post lockdown.

The intriguing trailer impressed online fans in big time as it contained sharp dialogues and crispy cuts. Arjun Das’s presence acted as an added value to the film. “Here we go #ANDHAGHAARAM trailer” wrote Atlee while releasing the trailer of the film for the first time.

As soon as the trailer released, many celebrities including Vijay Sethupathi, Karthick Subbaraj, Karan Johar and many others shared the link and extended their support for the upcoming venture of Atlee. The filmmaker thanked every one of them through his replies. Check out them below :

Your word is making our small effort much bigger sir , thanks so much for your love and support sir ❤️ definitely Cant expect any thing more sir , thanks once again sir , u made our day😊 https://t.co/8cuZEsvjtE

While replying to all these cinema celebrities and his colleagues, Atlee, unexpectedly replied to one of his old tweet by writing “Thank You sir”. The filmmaker deleted the tweet immediately but unfortunately gave enough space for few of his 30 lakh followers to troll the tweet where he thanked himself.

The screenshot of Atlee’s tweet is doing rounds in social media platforms with hilarious reactions. Check it out below :

Check out some of the reactions this tweet received below :

Though if Atlee’s admin handled the account at that time, he could have known that he can’t reply to his own account’s tweet. This mystery remains unsolved and speculations continues to surface regarding this weird Twitter activity of one of highest paid filmmaker in Kollywood.

Director Atlee who is known for his collaboration with actor Vijay, considered as one of important filmmaker among the new gen filmmakers. Being a former assistant of Director Shankar, Atlee’s way of presenting his films and his castings for the characters are considered as his major qualities. All the four films of Atlee became blockbusters despite of the plagiarism controversies.

The filmmaker is rumoured to collaborate with Bollywood badshah Shah Rukh Khan in his next which he mentions as A5. The official announcement is yet to be made by him.