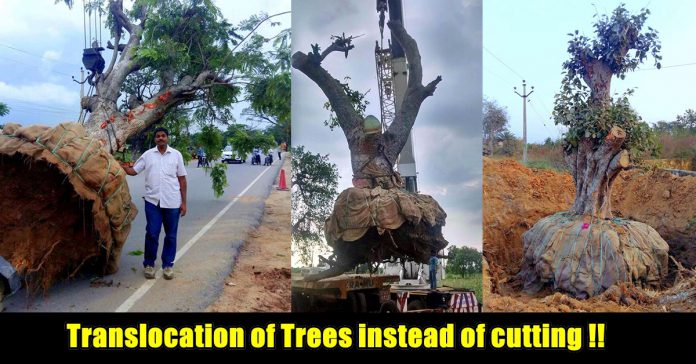 Residents in Bengaluru recently faced an issue because of a tree which has been grown well and a Hyderabadi man, named Ramachandra came to their rescue with a unique method, hardly explored in the attempt to save trees. The method helped urbanisation and also saved the trees from getting destroyed in the process. Urban spaces are developing everyday and it is difficult to retain the trees in the area because of new bridges being built.

In 2009, Ramachandra was travelling from Hyderabad to Vijayawada when he saw a road widening project being carried out. Lots of trees were being mowed down, and it struck him that there must be an alternative solution to such indiscriminate chopping of trees.

He read up the literature on tree translocation, and learnt from a friend in Australia that the practice was common in the country. “We however have had to customise ourselves according to Indian conditions. There are certain restrictions that we face here. The soil is very hard here, and the machinery used abroad will not work on rocky terrain. We also have to take care of electric wires hanging everywhere.” says Ramachandra.

As the construction for the Hyderabad Metro Rail project started, Ramachandra’s company pitched in to translocate the trees falling on the proposed track. “Back then, we translocated 800 trees for the Metro and that helped create a buzz around the company,” he states. Tree translocation is not a new process by any means. The practice can reportedly be dated to as far back as 2000 BC in Egypt. But with growing environmental awareness in the past few years, the process has gained more acceptance even among governments.

Trees that have to be relocated are first pruned, Ramachandra explains. Nearly 80% of the tree, leaves and branches included, is removed.

Then, a trench is dug around the tree, its depth based on the age of the tree. The roots are then treated with chemicals and packed in gunny bags, resembling a root ball. A crane then lifts the tree and loads it onto a trailer which ships it to its new destination.

At the new spot, the tree is then planted in a newly-dug pit treated with chemicals.

Ramachandra says that, so far, his company has translocated around 5,000 trees from 90 different species.

The cost of translocating trees depends on the size of the tree, the number of trees and the distance it has to be translocated to. “If the number of trees is more, the charge decreases considerably. Charges start at around Rs 6,000, but we have also charged Rs 1.5 lakh for one order,” Ramachandra says.

Though planting new trees is important, says Ramachandra, translocating is also a practical and viable practice as translocated trees regrow in just four or five years.

“If I am a 60-year-old and want trees in my farmhouse, instead of planting small trees that will take decades to attain their full shape, I can just translocate the trees. For me, these are quick readymade trees.” the man says.