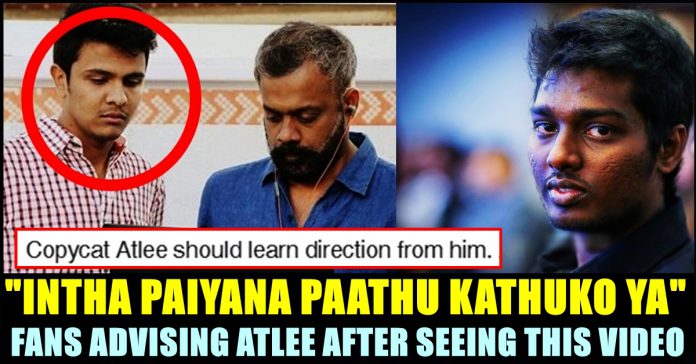 Director Karthick Naren who is just one film old, has already won many hearts of the cinema fans as his first film exceeded its expectations. Though he is struggling to release his second film “Naragasooran” due to financial issues, the filmmaker is now busy in the promotional interviews of his third directorial “Mafia” in which he casted Arun Vijay and Prasanna as protagonist and antagonist respectively.

The filmmaker who is just 25 years old answered to the questions of the reporters in a most intelligent way. When one of a reporter asked him to open about the issue he had with filmmaker Gautham Vasudev Menon, Karthick said that is just an experience and he intends to approach that matter in a positive way.

Meanwhile, a particular video clip from one of his recent interaction with producer Dhananjayan is doing rounds in the micro blogging social media site. In the interaction producer Dhananjayan asked Karthick how he completes the shooting of his films in such a short span when others are taking 6 months and 1 year to complete a movie. To his question, Karthick simply answered that it is all about planning.

The filmmaker who finished his Dhuruvangal Pathinaru, Naragasooran and Mafia in 28, 41, 33 days respectively was lauded by the producer for finishing his films so quickly. “We have to be clear about the entire script. We have to be clear on where the film starts and where it ends. It will be better for a filmmaker if he has that sense of editing while filmmaking. ” said Naren while answering.

Karthick Naren further said that he would prepare a storyboard before making any film. When Dhananjayan took a sly dig at director Atlee for wasting so many footages while making his film “Bigil” while questioning Karthik, the director said that he had not wasted a single scene he shot in all his films. To our surprise, he said that he didn’t go for patch work to reshoot scenes as well.

Fans who understood that Atlee’s Bigil is the film that had 6 long hours of footage started trolling the director while reacting to this video. Few even requested Atlee by mentioning his official twitter account to learn some planning skills from director Karthick Naren.

atlee should learn from him,atlee has shot much much scene for theri,mersal and bigil which is not in the movie!

Copycat Atlee should learn direction from him. Atlee have wasted alot of producers money. Overrated director

Atlee’s Bigil was made on a budget of 180 crores and the film has collected 300 crores according to the fans. He also believed to be one of the highest paid filmmaker in the Kollywood industry.

What do you think on this statement of Karthick and fans reactions to it ?/ Comment your views below !!