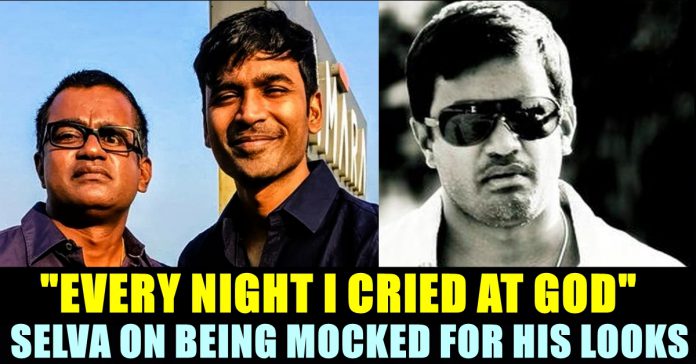 Selvaraghavan, one of the most influential filmmakers of Tamil cinema, came up with an emotional note to himself, revealing the trauma he went through during his childhood. The inspiring post of the genius filmmaker is being widely shared by the users of Internet as it was written in a way of helping the physically challenged to mentally overcome their struggles.

Selvaraghavan was born in a Tamil family to film director Kasthuri Raja and Vijayalakshmi. He has a brother, Dhanush, an actor, and two sisters, who are both doctors. Afflicted with Retinoblastoma, a cancer of the retina, an eye of Selva had to be removed so the cancer wouldn’t spread and “7G” maker makes public appearances wearing glasses.

Now, while completing a challenge in Instagram through which he had to write a note to his younger self, Selvaraghavan decided to write a letter to his 14 year old self to provide him the courage he needed the most at that age. In his post, Selvaraghavan revealed how the world laughed at him for the way he looked at that age. The filmmaker said that wherever he went at that age, people stared at him or mocked him for the lack of an eye.

The filmmaker made it public that he cried every night about it. He said that he even asked the God why he took his eye. “Every night you cry about it. Sometimes ask God “why me? Why did you take my eye?” he wrote in his post. Further he went on to console the young lad by saying what will happen in 10 years. He gave the younger Selva the courage he needs by saying that he is going to direct a blockbuster hit film which is going to change his life forever. He said that the same world will look at him, not to mock but to respect and admire him. He further added that the world will see a man who made changes in their lives with his movies.

“So dear boy. Be brave. If God takes something precious from you he will give it back to you in abundance. So cheer up. Smile for photographs (I’m not able to find a single one of you smiling) because in the years to come there will be many pictures being taken of you!
Love yourself, Director Selvaraghavan (age 45)” his post further read.

The filmmaker uploaded a blurry old picture of himself and posted it by asking his followers to do the same. Check out his post below :

Dear selva (age 14) The world is laughing at you about the way you look, because of your handicap, the lack of an eye. Where ever you go people stare at you or mock you. Every night you cry about it. Sometimes ask God "why me? Why did you take my eye?" But don't worry selva. In exactly 10 years you will write and direct a blockbuster hit that will change your life forever. The same world will keep looking at you but not with mocking derision but with respect and admiration. In the next ten years you will make movies that will go down in tamizh cinema history as trend setting cult classics. People will call you a "genius". When people look at you now, they don't see that eye that has haunted you for so much of your young life. They see a man who made a difference to their lives with his movies. So dear boy. Be brave. If God takes something precious from you he will give it back to you in abundance. So cheer up. Smile for photographs (I'm not able to find a single one of you smiling) because in the years to come there will be many pictures being taken of you! Love yourself, Director Selvaraghavan (age 45) This is part of the @mithratrust 7 day kindness challenge. Post a picture of your young self and add a message for the younger you. #kindmindclub #loveyourself

Venturing different genres in his filmmaking career, Selva is known for his romantic dramas such as Mayakkam Enna, 7 G Rainbow Colony, Kaadhal Konden. His gangster flick Pudhupettai is considered as a film ahead of its time and his period drama Aayirathil Oruvan and Fantasy love drama Irandam Ulagam are also boasting a separate fanbase. Recently the filmmaker announced that he is going to make sequel for his blockbuster film “Pudhupettai” by having his brother in the lead role.