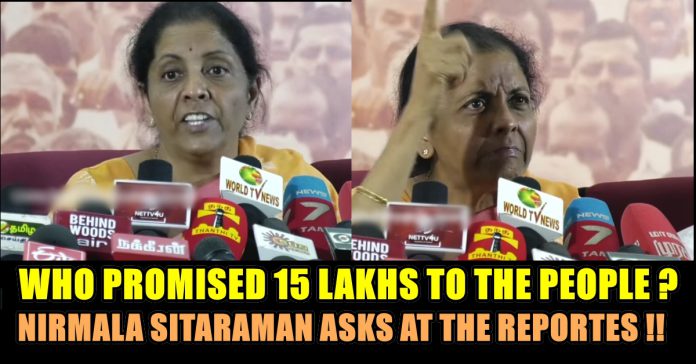 Nirmala Sitharaman  is an Indian politician currently serving as the Defence Minister of India. She is also a member of the Rajya Sabha for Karnataka.

Sitharaman has formerly served as the Minister of State for Finance and Corporate Affairs under the Ministry of Finance and the Minister for Commerce and Industry with independent charge. Prior to that, she has served as a national spokesperson for BJP. Recently she has attended a press conference where she faced a series of questions by the reporters. She was very furious while answering the reporters that we can see her criticizing Tamilnadu reporters for not listening her answers. She alleges that they are only concentrated on registering their questions against Modi government.

She was asked by reporters that small merchants are vastly affected because of GST. For that she said “Merchants who do below 20 lakhs business turnover will not be affected by GST, Just because you asked I cannot comment on the success of GST” she answered. When she was asked about the involvement of anti-national elements involvement in Thoothukudi protest, She answered as that the issue will be taken care of inquire department. Then the very next question from one of the reporter is that Modi raised his voice on so many happenings but why he did not uttered a single word on Thoothukudi killings ?

Narendra Modi’s Sensational Tweet On Sterlite Shootout !! : You Will Love Him For This !!

For that she answered “I’ll ask him and tell you” as a sudden reply. Watch the video below and the people response for it as well :

People responded for her answers as well :

She also addressed about many issues in the video. What do you think on her speech ?