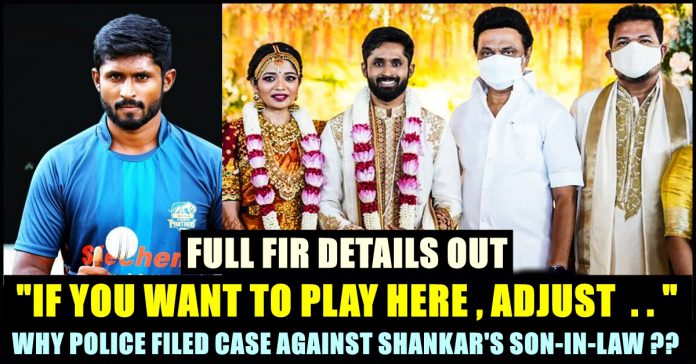 Days ago, A number of shocking reports emerged alleging that Police have registered case against six members including Director Shankar’s son-in-law Rohit in a minor girl sexual harassment case. Rohit who is a cricketer by profession got married to Shankar’s elder daughter Aishwarya in June month with chief minister MK Stalin and many other influential personalities attending the marriage event to bless the couple. Now, FIR details about the case is out and on what grounds Rohit and his father got accused has been revealed.

According to Vikatan, the minor girl got sexually harassed by a trainer named Thamarai Kannan. When she complained about the same to Rohit and his father, the duo neglected the girl’s complaint and failed to take action against the harasser. Associate secretary Venkat and coach Jayakumar were also accused along with Rohit, Damotharan (Rohit’s father) for the abetting the crime and for hiding about the same.

It has been report that Thamarai Kannan, a cricket coach in the union territory sexually harassed a 10th class student who came to get cricket training. When the girl complained about the trauma she went through to the cricket club, the authorities tried to silence the girl and failed to take action against the harasser. The victim decided to make legal complaint about the same, says reports.

The victim, in her FIR statement said that Thamarai Kannan who is one of the senior players gave coaching for all the players. “While coaching me, he touched my private parts and sexually harassed me. I immediately scolded him and asked not to behave like that to me. When I complained about him to Jayakumar, he promised me to warn him but he didn’t do so and didn’t take any kind of actions as well. But Thamarai Kannan kept harassing me sexually. He was involved in throwing balls at me while I was sitting” the victim said and opened about her meeting with Rohit.

“I went to Cricket association of Pondicherry for selection in July, 2021 and met senior player and Captain of cricket association of Pondicherry Rohit brother there. When I complained to him about Thamarai Kannan’s behaviour towards me, Rohit Anna told me “That’s not a big issue. All the girls who are playing here go through these kind of harassments. If you want to play, adjust and move on” and left” the victim said in her FIR statement, according to Vikatan.

“When I complained about the same to Damodaran, former secretary of Cricket association of Pondicherry, he said similar things what Rohit Anna told. He also threatened me not to tell about it to any one. He said that my name would not be selected in the 20 players list if I tell about it to any one. He also asked me not to “waste his time”. After few days, I texted to Thamarai Kannan , inquiring about my broken bat. He replied me some obscene texts to me at that time” the victim said.

“He said that his wife is pregnant and he couldn’t maintain intimacy with her. He also said that he is in love with me and said that our relationship is not brother-sister one. He also threatened me that he won’t be training me if I deny to do as per his wish” the minor said whose mother found about Thamarai Kannan’s behaviour. When the mother-daughter duo went to complaint against Thamarai Kannan, secretary Chandru asked them to write a complaint letter. While submitting the letter, Associate secretary Venkat who was present there, sent back the victim’s mother and father, according to the Vikatan.

“He further got sign from us in a white paper and promised to take action against Thamarai Kannan. On October 14th, Thamarai Kannan went to the victim’s house with his wife and asked her not to complain against him. “At that time, my father called his friends and police came to our house. Only then, they left. I got afraid of his activities and called 1098 complained at Child care. I requested them to take action against everyone including Thamarai Kannan. Based on this complaint of mine, case under POCSO sections 10 and 12 were registered against Thamarai Kannan. For abetting the crime, case under POCSO section 12 has been registered former secretary Damotharan, Coach Jayakumar, Puducherry senior cricket team captain Rohit and associate secretary Venkat” the victim said, according to Vikatan. All the 5 members are being searched by cops to be nabbed.