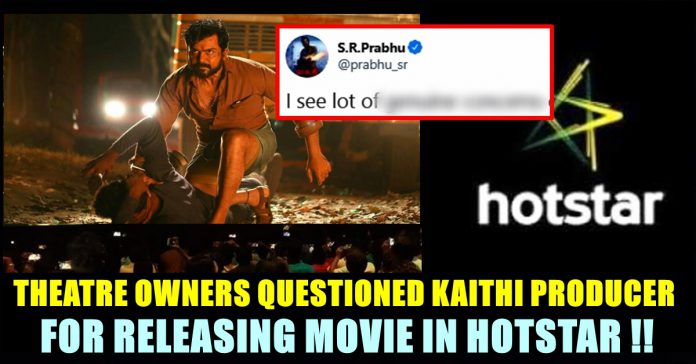 Kaithi starring Karthi released on online streaming platform Hotstar when it is running successfully in theatres. “Kaithi” film released along with highly anticipated “Bigil” and running successfully despite of the star value of the Vijay starrer. Having no heroine, songs or flashback, “Kaithi” film is impressing the audience for its strong and intense plot. Karthi who already chose to do performances oriented films such as “Aayirathil Oruvan”, “Paruthi Veeran”, “Theeran Athigaram Ondru”, excelled in “Kaithi” in his own way.

Now, as many questioned the producer why he released the film when it is running successfully in theatres in its 30th day, Producer S.R Prabhu, chief of Dream Warrior Pictures has came up with an explanation. The producer, in his tweet said that he released it to cover the loss he faced through piracies such as Tamil rockers and due to the less terms from 3rd week.

“I see lot of genuine concerns over the 30 day window for films in OTT while running successfully in BO. Theatrical audience will reduce eventually if we continue this trend!? Yes! But, piracy & less terms from 3rd week can be compensated for producers only through this! #Kaithi” read the tweet of Prabhu.

I see lot of genuine concerns over the 30 day window for films in OTT while running successfully in BO. Theatrical audience will reduce eventually if we continue this trend!? Yes! But, piracy & less terms from 3rd week can be compensated for producers only through this! #Kaithi

As soon as the producer released the film in OTT platform, Chennai’s leading multiplex PVR which also owns SPI cinemas removed the movie from all its premises as it doesn’t want to encourage the producer’s decision on releasing the movie in OTT before the end of its theatrical run.

Two out of three shows of #Kaithi went houseful yesterday @RohiniSilverScr on its 30th day since release. Today it is out officially online. This may not have an immediate effect but sets a dangerous precedent for the industry. Walking into a corporate trap, are we?

Instead why can’t we exhibitors have an agreement with the producers that we shall stop screening once it’s out on OTT.

The 60 day theatrical window shud be followed what so ever.

To these tweets Prabhu said that he welcomes the idea of agreement only if the 60 day run is guaranteed and with the prevention of piracy. He also added that it is possible if the majority accepts it.

I welcome the idea of agreement process if it comes with piracy clause ( cam prints ) & guaranteed run on screens! But this is possible only when the majority agree to it!

What do you think on this production strategy of Prabhu ?? Comment your views !!