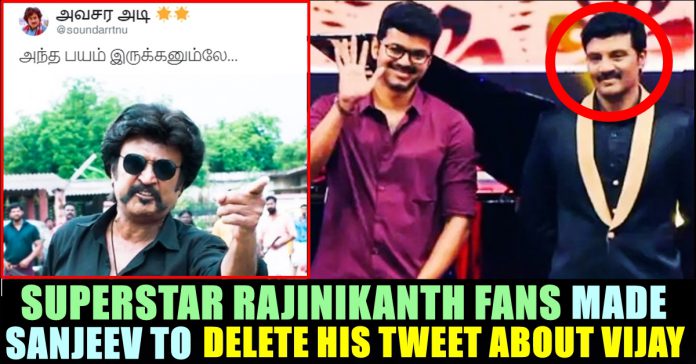 Among the fans of Tamil cinema, there will always be a debate on who is going to be the next Superstar of Kollywood. The first contenders they consider for the title is two of the highest paid actors of Indian cinema Vijay and Ajith kumar. Fans of both the actors often found themselves amidst heated arguments and ugly verbal spats while trying to prove that their favourite hero is the superior one comparing to the other. Not only fans of these actors, verbal spats between the fans of cinema actors is taking place since MGR-Sivaji Ganesan period.

Now, to our shock, fans of Superstar Rajinikanth made popular actor Sanjeev who is a dear friend of actor Vijay to delete one of his recent tweet, in which he mentioned Vijay as a “Superstar”. Sanjeev who is very well known for Tamil audience for his role “Selvam” in popular Tamil television serial “Thirumathi Selvam”, is going to appear in “Master”, a most expected film of actor Vijay. In his initial stage of acting career, Sanjeev appeared as Vijay’s friend in number of movies such as Nilaave Va, Puthiya Geethai, Badri etc. It is notable that both of them are close friends in real life as they had studied Visual communications in Loyola college together.

For the past few days, Sanjeev is pretty much active in the micro blogging social media platform. The actor who got his account verified recently, has been giving updates about “Master” movie to the fans of actor Vijay. Recently, he gave an update to Vijay fans saying that the post production work of “Master” is in full swing.

Lately, the actor posted a tweet celebrating the moment where Vijay’s selfie reached 100k retweets in Twitter. The selfie which was captured by Vijay himself amidst Neyveli crowd during “Master” shooting, was uploaded in his official twitter account on 10th of February. On Sunday, the tweet reached 1 lakh shares and Sanjeev celebrated it by posting a picture of Vijay capturing the selfie. He wrote “He was silent, you made him a Superstar” as a caption to his post.

As soon as Sanjeev posted this tweet, many fans of actor Rajinikanth stormed into the comment section and demanded a delete, saying that Rajinikanth is the only “Superstar” in Indian cinema and no other actor deserves such title as he is still acting in movies as protagonist. Sanjeev deleted his tweet immediately and posted a new one without using the term”Superstar”.

Fans of actor Rajinikanth appreciated Sanjeev for his immediate reaction and few asked him not to repeat the same. Check out some of their replies below :

Don't use the word super star hereafter to cool your friend , its only one that's our thalaivar pic.twitter.com/3y9gazEirw

What do you think on these comments received by Sanjeev ?? Comment your views !!