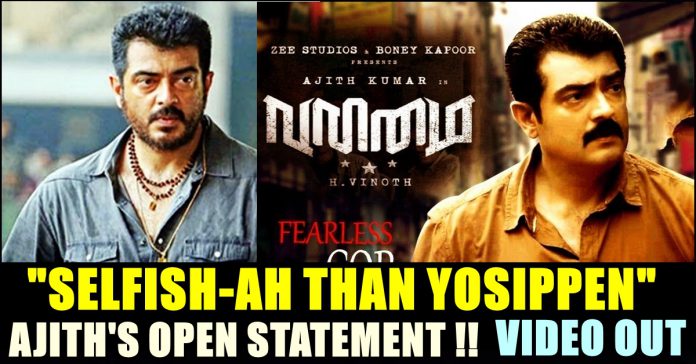 A video interview of Tamil star Ajith KUmar which was shot during 1997 was released by Sun Tv’s official youtube channel. The 10 minute long video shows the actor speaking his heart out. He answered to various questions asked by the old anchors of Sun tv who asked him about his success, failures, gossips etc.

The actor who is now avoiding to give his appearance in public stages, has talked in a honest way in this 23 year old video. Being one of the leading actors of Kollywood, actor Ajithkumar enjoys a huge fan base in Tamilnadu. Despite of getting a humongous amount of love from his fans, Ajith refused to have fan clubs and dismantled it few years ago as he wants his fans to look after their families. This only increased the love of fans for him as they started admiring him more for his attributes.

In this interview the Viswasam actor said that he worked in Chennai motors for 6 months before entering the film industry and added that he left the job due to his parents who didn’t like him pursuing mechanic. Throughout the video, the actor can be seen sticking to his idea of believing directors as the captain of the ship. When he was asked the reason behind his movies becoming flops, Ajith said “Even for my hit films, I didn’t hear the story. Basically, I am an actor. If I have the capability to do change in scripts, I would have become a director. It is a director’s responsibility. If a film gets success, you are giving credits to the director. How can I take the blame for the failures of my movies. It is not my fault, it is director’s fault” he said. “Producer who spends 2 and half crores for a film would accept producing it only after hearing the story. He also has the same responsibility as mine” he added.

Ajith has admitted that he lives according to his own terms 23 years ago itself. In a way of acting according to it, Ajith avoids to appear in promotional events of his films and not involving in any political issues. The way he spoke in front of Late chief minister Kalaignar Karunanidhi in an event about being compelled to attend functions is one of the best example for us to realize that Ajithkumar is a man of his words.

“I live my life according to my own terms. If I don’t like to get involved in a matter, I will let them know about it immediately. I don’t know dragging and all. I will speak my heart out and there is no room for hypocrisy in my life” said Ajith while explaining about his own self. While talking about choosing scripts, Ajith said “I don’t want to know about story and all. I only demand to know about my character. I want to know whether it is a performance oriented role or not. I tend to think only in a selfish way. Just say if Ajith is required for the script or not. Don’t make a script for me. I will never accept it” the actor said in the interview.