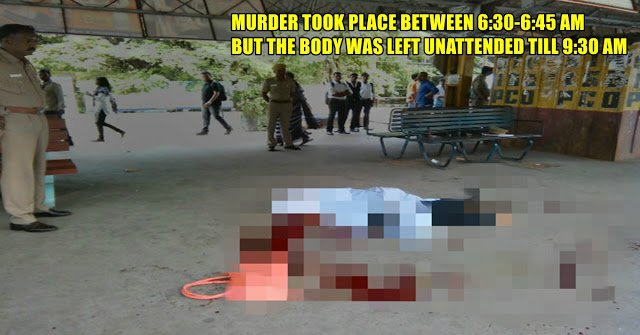 In a cloudy afternoon outside the Madras Medical College mortuary, a close circle of relatives gathered round near the ramp leading to the morgue, grieving. The daylight murder of 24-year-old Swathi, an Infosys employee who was boarding her daily suburban in the Nungambakkam railway station, had left many irate over the safety of their own family member.
More than an air of morose, there was rage. Tempers were flaring as rumours began to circulate over possible motives for the murder. Speaking to a TV reporter, Swathi’s uncle said that questions over the girl must not be of paramount importance, and they must instead be directed towards the lack of a police force. The family recounted how they had raised a kind soft-spoken woman of great potential, with great care. They wanted to make it clear that the sheer apathy of the Railway police force alarmed them all. A close friend of Swathi’s who did not want to be named, said, “When I heard the news, we ran to the station at around 9:30, but what we saw just shocked us. The body was still there from 6:30 or 6.45 am and the RPF was working so slowly. There was blood everywhere. We don’t understand how a body can be neglected. And to see our friend like that, it really hurt.”
Swathi finished her engineering from the Dhalakashmi College of Engineering in 2014, and joined Infosys in 2015.
According to friends and cousins, she was known to be a kind hearted, reserved girl, sheltered and brought up in the confines of a conservative household. “She made sure she never antagonised anyone. The moment she saw conflict, she would not respond. She kept to herself even at work, and had a close circle of friends.” After a pause, an effort to put the rumours to rest arose, “She didn’t mingle much with men.”
Disbelief loomed over the fact that it was just a few minutes before her murder that her father had dropped her, as he always had every morning. “To say that this city is safe despite a daylight murder happening to our friend makes us angry. If we had a timely police force, if we had cameras installed, things would have been different. But this could happen to anyone,” her friend says, adding, “Instead of raising questions over her personal life and her relationships which we all typically do, answers from the police are needed.
Also Read : Chennai No More A Safe Place For Women? 24 Yr Old Hacked To Death In Nungambakkam
source-TheNewsMinute