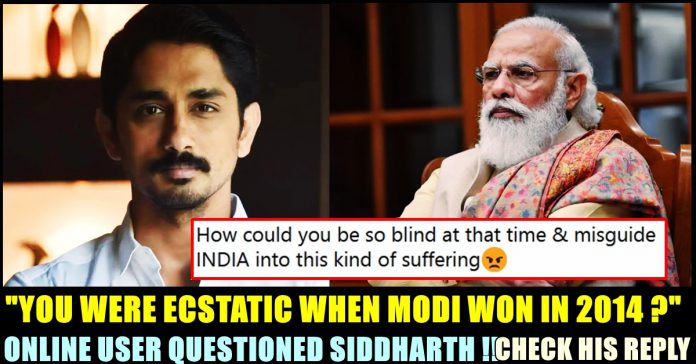 On seeing actor Siddharth constantly voicing against the BJP government through his official twitter handle, a follower named Veena questioned him why he felt ecstatic when he won the election in the year 2014. She asked the actor how could he be so blind at that time and misguide the public into the suffering they are going through now. Veena asked the question by quoting a tweet of the actor in which he talked about the government’s fascism. In a way of replying to everyone who were asking the same question to the actor for all these days, Sidd simply said that it is a good question and added that he is asking himself the same everyday.

Recently, Siddharth received threat for his life and his family for criticizing the ruling government through his tweets. His mobile number was circulated in social media platforms by the Tamil BJP supporters and the actor was offered police protection for his house. However, the actor denied it and said that the time and energy of those policemen who are going to guard his house, should be used in something else at this pandemic situation. He didn’t stop and continued to express his opinions and came down ever harder at the Modi-led government.

Recently, the actor reacted to a tweet which talked about BJP’s next stage of operation in South India. To the tweet which read “No, Ravishankar Prasad hasn’t been put to grass. In fact, this seems to be the next stage in BJP’s operation South India. Expect Raj Bhavan to be in the thick of things, much like Jagdeep Dhankhar in WB.” Siddharth replied writing “First poison the governorship. Then poison the government. Then the state. Then the country. Fascism thrills, but kills.”

On seeing the online activity of the actor, a Twitter user named Veena asked Siddharth why he felt ecstatic when Modi won the election in 2014. She further questioned him whether he was not aware of the himself being a fascist/bigot/communal/murderer and mentioned about the Godhara riot that took place in the year 2002.

“My question is to you Siddharth, When MODI won in 2014, U were ecstatic … Didn’t U know he was fascist/bigot/communal/murderer (after 2002 Godhara riot )..? How could you be so blind at that time & misguide INDIA into this kind of suffering” Veena’s question to Siddharth read.

My question is to you @Actor_Siddharth … When MODI won in 2014, U were ecstatic … Didn't U know he was fascist/bigot/communal/murderer (after 2002 Godhara riot )..?

How could you be so blind at that time & misguide INDIA into this kind of suffering😠 https://t.co/XlJGulxAcp

When many answered the question of Veena saying that the promises he made at that time were worth to give a try and Siddharth could have expected a change of government at that time, the actor himself came up with a reply which received huge attention. Siddharth wrote “Good question. I ask myself this every day.” as his reply and kept it as his pinned tweet on his twitter timeline.

Good question. I ask myself this every day. https://t.co/UqXF7aTygD

Many lauded the actor’s honesty and said that it is one of the smartest ways to answer the question as well. “Very genuine, honest & smart answer! And btw who knew Modi would be so disastrous unless one is politically affiliated to one party, no one had any complaints about BJP then, tbh!” a user said. Check out some of the reactions below :

I see honesty hidden in your answer

Most were witnessing INC's policy paralysis, rising prices, and then Nirbhaya happened

In the Euphoria that followed, people bought the marketing idea of one "successful CM" of some state.

2002 was back of our minds – But overwhelmed, sadly

Very genuine, honest & smart answer! And btw who knew Modi would be so disastrous unless one is politically affiliated to one party, no one had any complaints about BJP then, tbh!

& a few million more ask the same question to themselves every day, including yours truly!

Write an article on your experience.

How you were fooled in 2014.
And what was the first incidence after 2014, that broke your confidence for Modi.

Even people who voted for congress were excited to see a full majority govt. They were actually expecting ache din. They believed in him even when they suffered demonitization. But its one disappointment after other and no sign of improvement.