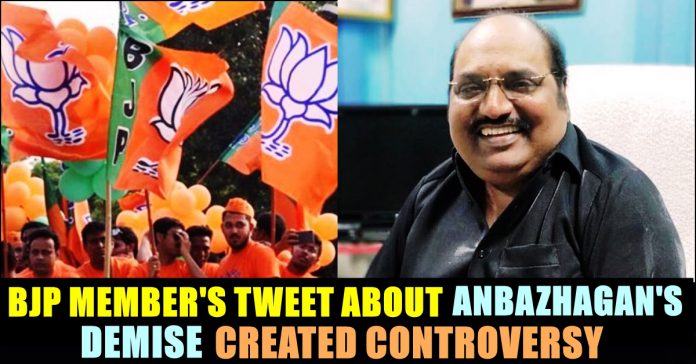 Followed by the demise of DMK MLA J. Anbazhagan, many people including chief minister Edappadi Pazhaniswamy of ADMK party offered their condolences to the family of the deceased. Meanwhile a tweet of BJP’s spokesperson SG Suryah has created a huge controversy in the micro blogging social media site. J Anbazhagan who was fighting against the COVID 19 for past few days, died at the age of 62 in a Chennai hospital in the morning of 10th June. Anbazhagan, a DMK MLA, was admitted to hospital on June 2 over “severe acute respiratory distress” and had tested positive for COVID-19 at the time.

He was put on ventilator support on June 3 when his breathing trouble worsened. He was fighting acute pneumonia and his condition deteriorated on Monday evening, according to Dr Rela Institute and Medical Centre, where he was being treated. His cardiac function dropped and a chronic kidney disease also contributed to his critical condition.In a statement today, the private hospital said: “The COVID 19 pneumonia rapidly deteriorated early this morning. In spite of full medical support including mechanical ventilation at our COVID facility he succumbed to his illness.”

While many of the public and influential personalities posted tweets mourning for the demise of J. Anbazhagan, SG Suryah, BJP’s spokesperson posted a series of tweets blaming DMK party leader for making Anbazhagan work even at this pandemic situation. He asked why Stalin didn’t stop Anbazhagan from working as he is a surgery patient already. “You are wearing mask even for video calls, why you didn’t care for the life of your party member?” asked SG Suryah through his tweets.

“To fulfill your dream of becoming Chief minister, how many programs you have conducted without safety measurements? Can’t imagine how many people got infected by COVID 19. For the thumping spread of Covid 19 in Tamilnadu, DMK’s “Ondrinaivom Va” movement might be one of the reason it seems” he said in his tweets.

After few minutes of posting these tweets, SG Suryah deleted them due to the wrong timing and the comments it received. However, the screenshot of the same are doing rounds in the micro blogging social media site.

Many people who belong to the DMK political party captured the screenshot and questioned SG Suryah for his deleted tweets. One of a twitter user compared DMK members with doctors and nurses who got infected with Coronavirus and asked SG Suryah to state his opinion on them.

“Waiting for SG Suryah to talk about how careless doctors were to work, during corona time.” wrote the twitter user by uploading a picture of the news regarding doctors and nurses getting infected.

Waiting for @SuryahSG to talk about how careless doctors were to work, during corona time. pic.twitter.com/EgZmRbhRKl

Replying to this tweet, SG Suryah said that he deleted his tweets only because of the timing, “not because any of the contents were wrong” he said.

No point in targeting me. Everybody agrees that a person above 60 years with many ailments & a transplant ought to be very careful by taking care in isolation. The party failed him. I deleted tweets just because of the timing, not because any of the contents were wrong. https://t.co/McsDg6Jd8r

J Anbazhagan went through a liver transplant surgery in London 25 years ago and it is highly believed that it made his health challenging. Sources revealed that Anbazhagan had other health complications related to liver and Kidney. During this pandemic situation, Anbazhagan was actively involved in doing service for the people on his constitution. Representing the Chepauk-Triplicane Assembly constituency, he actively took part in relief work during the lockdown period. Now, his demise due to C0VID 19, has made his fellow party members and workers to be more cautious than before.

Comment your views on these accusations of SG Suryah !!