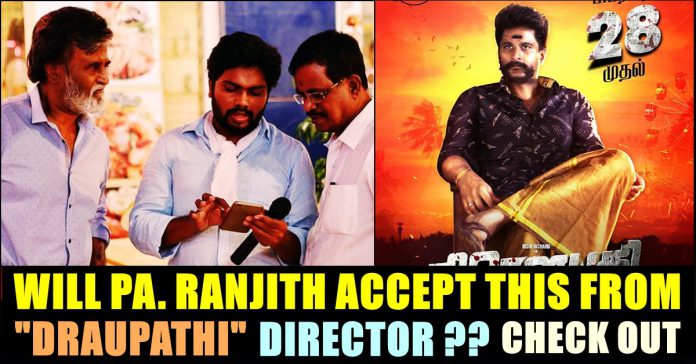 “Draupathi” director Mohan G has invited Pa.Ranjith to watch his film and share his opinion. What started as a least expected low budget upcoming film, has became one of the highly profitable film as it created debate among the supporters and anti supporters of caste in Tamilnadu. The film “Draupathi” is directed by Mohan G who made “Pazhaya Vannara Pettai” as his debut film. The trailer of his “Draupathi” released recently only to create ruckus. The film indeed divided the people of social media into two sections as many people started supporting it and equal number of people are expressing their thoughts against it.

The portrayal of caste in Tamil films has been raised in large number in recent times. While films like Pariyerum Perumal, Kabali from Pa. Ranjith emerged to expose the caste oppression that still takes place in the society, mostly from rural part of the Tamil speaking state, films which celebrates a particular caste are also continues to be made. “Draupathy” happens to be the latest one to join the list. Though the makers of “Draupathy” are claiming that the film is not a cast based one, the attitude of the viewers who watched the film evidently shows what the film is about.

The film vaguely tries to tell us that youngsters from “lower” caste are luring the women of upper caste groups in order to lead a wealthy life. The film has Rishi Richard and Sheela in the lead roles. The film is being supported by H.Raja of BJP, Gayathri Raguramm and by so many cinema celebrities. Now, director Mohan has made an open invite to Director P Ranjith to watch the film, who hasn’t posted anything about the film since its release.

A popular film distributor JSK Gopi posted a tweet requesting Pa Ranjith to watch “Draupathy” film. He said that he tried to contact him in many ways but failed. “You should watch the film to make the saying of Ambedkar true” he said in his tweet.

Will Pa Ranjith accept the request of Mohan ?? Comment your views !!