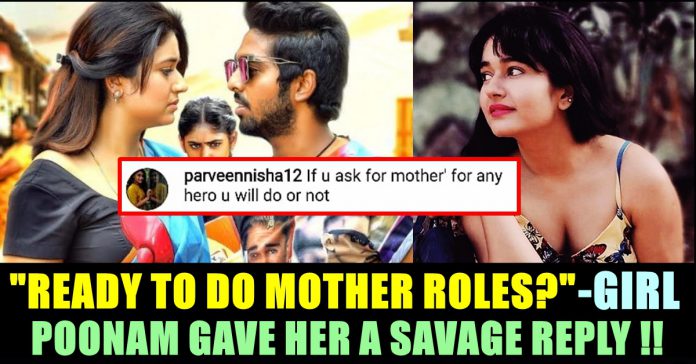 Tamil actress Poonam Bajwa is one of the many active female celebrities who keeps their Instagram timeline busy. From posting her pictures to replying her followers, she loves to keep her account active it seems. Having more than 10 lakh followers in Instagram, Poonam Bajwa would receive many requests from her fans. Now in her recent post, one of her follower asked if she would accept mother roles if offered.

Online fans are always desperate in interacting with their favourite celebrities. In one of Poonam Bajwa’s Onam celebration Instagram post one of a female fan asked this to her.Check out the pictures she posted to celebrate Onam :

Wishing you and you family Happy Onam !!!

The Instagram user, in her comment asked “If u ask for mother’ for any hero u will do or not”. Poonam Bhajwa who replies to many of her fans, decided to reply to this comment as well. Instead of giving a harsh reply, Poonam, in her reply comment gave a perfect answer.

“if they agree to play my father in another movie .Maybe.” she replied. Check out the screenshot of the conversation here :

Earlier this year, one of a fan requested her not to act in “Aunty” roles like she done in G.V Prakash’s “Kuppathu Raja”. “Please don’t act any role which involves Aunty kind, your heroine and amazing person too. Please stick to your goal. Good luck” Check how she replied to him then :

In “Kuppathu Raja” movie, When the lead couple of the movie dreams of a life together, Poonam played the role of a Mary, a new resident to the slum. The movie portrayed Poonam as a woman who is much more older than G.V Prakash who is actually younger than the actor in real life.

For the uninitiated, Poonam Bajwa is an actress, who predominantly appears in South Indian films. She started her acting career in the year 2005 and her debut movie is Modati Cinema which is a Telugu movie, after that movie she featured in more Telugu movies which include Boss. Her debut Tamil movie is Seval. Then subsequently she appeared in the movies like Thenavattu and Kacheri Arambam.