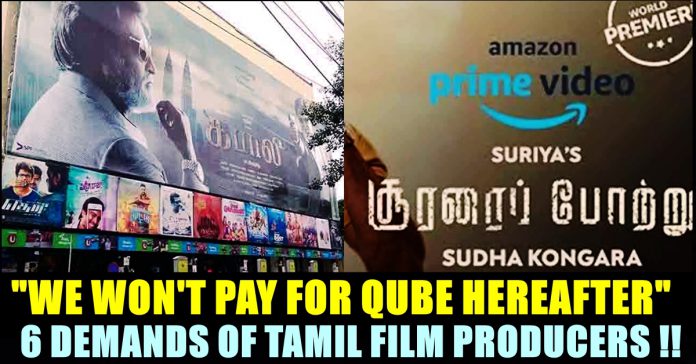 The Tamil film active producers association, headed by legendary director P Bharathi Raja, has written a letter to the Tamil nadu theatre Owners association placing 6 demands. About 51 producers including Lyca productions, Y not studios, V creations, Vels International, Studio Green have made the request on behalf of all the producers in Tamil film industry.

The producers have made sure, even if government allows theatres to function post COVID 19 outbreak, they will sell their films to theatres only if their demands were fulfilled. This decision was taken by the producers after a number of films including Suriya’s “Soorarai Pottru” sold to OTT platforms. While the Theatre owners are severely condemning the actor’s decision, the Tamil nadu active producers association came up with the demand.

The producers wanted the existing theatre share percentage to be reconstructed based on the film’s budget and area in which it is being screened. It is notable that the theatre shares are calculated by 50% of revenue during the first week, 40% during the second week and 30% from third week onwards.

The producers also wanted to receive a share in the advertisement revenue generated in theatres from playing commercials. They said that they are spending one to two crores in promoting a film and in bringing the audience to the theatres. “In that case, ad revenue cannot be split among the digital companies and theatre alone” their statement read. They have also demanded a portion of the revenue generated from online sale of tickets through platforms like BookMyshow and Ticketnew.

In their next demand, theatre owners enforced “hold over” in theatres. “Most theatres did not give good film a chance to pick up. Films with “hold over” should not be changed abruptly in theatres. We can discuss the “hold over” percentage” their statement said.

In their last demand, they have said “When it comes to exhibitors who claim to have leased out theatres with just oral confirmation, the producers lose out on the second run money and deposit.” said the producers. “We will not be screening our theatres in such theatres that are run by such persons” they added.

It is notable that Bharathi Raja endorsed Suriya’s decision of releasing his film on OTT. Now, on seeing these demands from the producers, audience also started making complaints against the theatres. Some of them even encouraged producers to release film on OTT platforms to show their strength. Check out some of the reactions below :

Release in OTT. Producers should show their strength.

Let theater be closed as it is, you all release the movie in OTT

Comment your views on these demands of the Producers !!