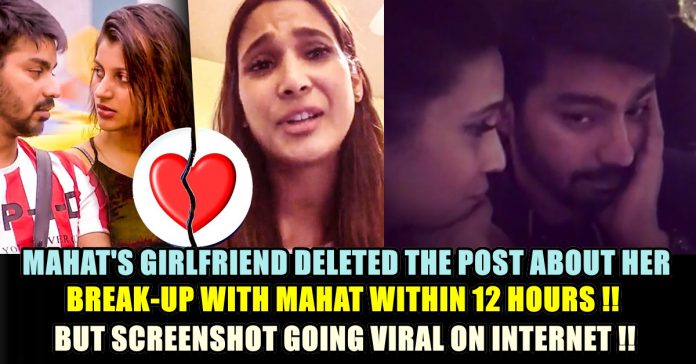 Mahat Raghavendra is one of the most-talked-about contestants in the ongoing Bigg Boss Tamil 2. More than bouquets, he is receiving brickbats from the audience. His “love boy image” has done him no good although it is believed that the actor is a strong contestant to enter the last stage of the Kamal Haasan-hosted show. His behaviour in Bigg Boss Tamil has come under the scanner. His proximity with Yashika has raised eyebrows and earned him the tag of “love boy” among the viewers. It has also made people dig about his past and present relationships.

Going by media reports, Mahat Raghavendra is in love with Miss India Earth 2012 Prachi Mishra. They are dating for over a year now and their relationship is said to be steady. They met for the first time in an event in Dubai. Their initial friendship has gradually turned into love. “Theirs is a long-distance relationship — Prachi is based out of Dubai and Mahat travels to the country to be with his family when he is not shooting for his films in India. However, they make it a point to meet as often. In fact, they recently travelled to Australia for a short vacation together,” a source in the know told The Times of India earlier.

Earlier Prachi went on live to clear the queries everyone who had questions about Mahat’s behaviour in Bigg Boss house and his relationship with Yashika inside the house. Everyone expected something bold from her the model only answered diplomatically in that live session. Now today to our shock as the effect of Yesterday’s show in which Mahat confessed that he is love with Yashika, Prachi announced that she is no more with Mahat. She also worried about Mahat being so mean to Mumtaz. She wrote it by attaching a video she made with Mahat before he entering inside the house.

Prachi wrote “This is how #mahat went inside the house, I sent someone whom I love and we planned our life around the big boss timing etc.
I am making my personal life public so that ppl who are bombarding my social media with msgs of sympathy or filthy things – plz know one thing that mahat Went inside Like this! He was in love and I still am…. To answer everyone – I am not with him anymore, but I will meet him in Person and discuss everything.
He is in love with Yashika and that’s open now, I am hurt but this will not change my life and I will take care of myself.
He is mean to Mumtaz and his only well wisher janani , he is not standing for her too!
It’s a humble Request to everyone plz stop asking me anything about him, thank you for all the msgs and concern that you have shown, it’s my personal life and I will take care.

And the model had deleted her post on Instagram within 12 hours which went viral on Social media network. Though she deleted the post the screenshot is doing rounds in social media platform.