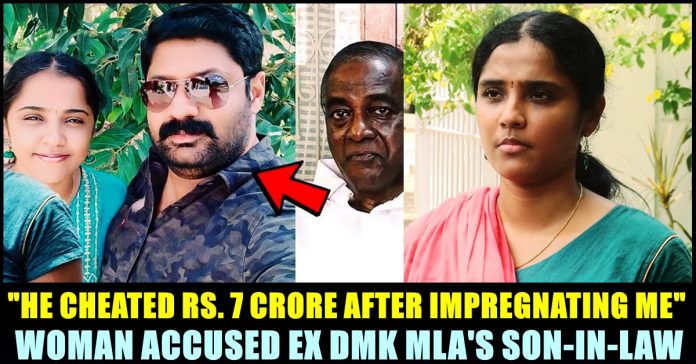 A woman named Sindhuja accused one Arun Prakash, son-in-law of former DMK MLA Kovai Thangam of cheating Rs. 7 crore of her money in the pretext of marrying her. She also accused Arun Prakash of impregnating her and says that the latter is denying it now. Addressing the reporters, Sindhuja said that Arun Prakash’s wife and “Kovai” Thangam threatening her to retract the case that she registered against Arun Prakash.

“I got divorced seven years ago and Arun Prakash, son-in-law of ex-MLA was working with my husband at that time. In the pretext of marrying me, he cheated all my money and also impregnated me. He is now denying impregnating me and refuses to answer for the money he bought from me. When I asked them to give my money back, Kovai Thangam, Arun Prakash and his wife are threatening me with goons.” Sindhuja said to press.

“My parents are senior citizens. I am the only daughter for them and I have one child. There is no assurance for my life now and I have registered a complaint already in Coimbatore. I have transacted Rs. 7 crore through bank and gave him Rs. 2 crore as cash. He denies receiving money from me now and threatens me by sending goons to my house” she says to the press.

“He was already married. When I was depressed due to my divorce, he approached me and promised to marry me. Now, he is talking like he is not the father of my child. I can prove that he is the father of my child. I also have the proofs for all my transactions. I believed his word and gave him all the money. His family knows about the money. Till 2013, he was living in a small rental house and he has now built a huge bungalow that worth Rs. 5 crores and it happened only after 2013.” she further said.

“He is not doing any business but says that he is going to join DMK and threatens me saying that he has the support of the ruling party. I don’t want to marry him now as he physically assaulted me a lot during our relationship. I am not interested in living with him now. I don’t want his money as well. I just want the money I gave him back. In police investigation, he said that he will give Rs. 70 lakh for me and my child and denied it later. He left station saying that he has to think about it till July 30 and his father-in-law and wife came to my house to threaten me after two days. ” she said in her statement.