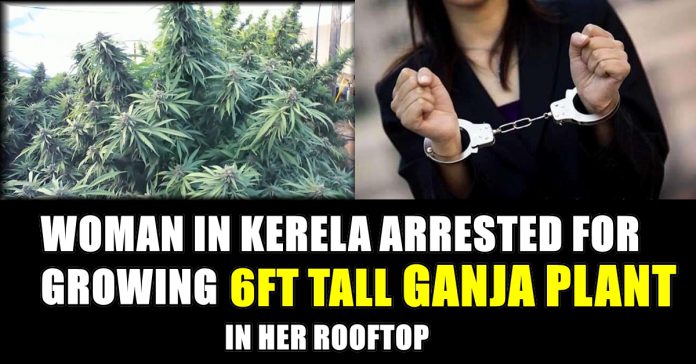 Ann Mary Clement, a tour operator and insurance agent living on Vattekkadu Road in Kaloor allegedly had in possession 5 cannabis plants of nearly 6.5 ft height, according to a report in TNIE.

The accused, who lives with her 66-year-old mother allegedly confessed during interrogation that the plants were handed to her by one of her friends. She also admitted to growing the plants for over 6 months. The woman who was 37 year old was arrested by police. She is allegedly growing cannabis on the rooftop of her home which is in Kochi.

According to the officers, the accused is unmarried. “Five plants at a height of 6.5 feet and six months old were seized from the residence of the accused. During interrogation the accused confessed the ganja plants were handed over to her by one of her friends,” said Ernakulam North SI Vipin Das. The accused said that she planted the ganja six months back. She, however, has not revealed the name of her accomplices, said a police official. A police team has been scouting the area for the past three days on a tip-off that marijuana was being cultivated in one of the houses. “The shadow police alerted us about suspicious activities and the house was put under observation for two-to-three days. We saw people coming and going and decided to conduct a raid,” Vipin Das, Ernakulam told TOI. Police sources said a detailed probe will be conducted to check if the woman had any links with the organized ganja peddlers in the city.  The ganja plants were planted in five flowerpots and placed on the terrace. A case has been registered under Narcotic Drugs and Psychotropic Substances Act 1985. “She will be produced before the court on Friday,” said Vipin Das.

The woman’s mother, however, claimed that the plants were grown for medicinal purposes and it was never sold to outsiders, according to TOI.

“I have had severe thyroid issues and had been suffering from resultant bouts of anxiety and depression as well. Despite having sought treatment from allopathy, ayurveda and homeopathy, I did not get any relief. For three years I have been using cannabis juice and it gave me much better results than any other medication,” Ann Mary’s mother Treesa Ann Clement told TOI.