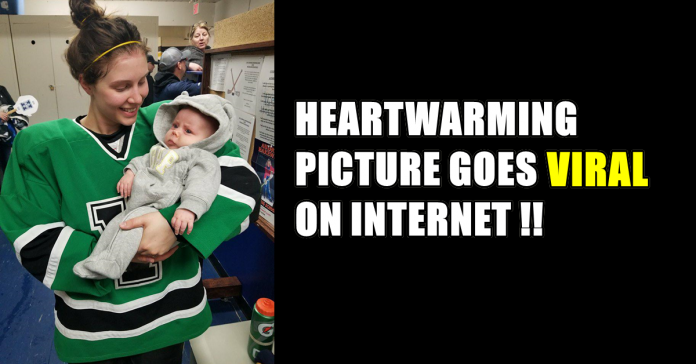 Being a mother is equal to being on full-time duty. Be it anywhere, anytime, they altruistically take up duties such as holding their hand, buying them what they wanted but this hockey playing mother reached one step ahead.

Serah Small, a teacher and hockey player from Alberta, Canada, didn’t let motherhood overshadow her own self. She is going viral on the internet for breastfeeding her baby during the break in a hockey match. Sparking debates on breastfeeding in public, Serah’s picture with her baby in hand has gone viral. She is mother to an eight-week-old baby girl, Ellie. At one of the games, she realized she’d forgotten her breast pump at home.

So, she stripped down in the locker room and breastfed her little one in between periods of her game.

Milky Way Lactation Services shared the picture of Serah breastfeeding her baby in the locker room between the game. The picture went viral garnering both positive and negative reviews from social media users. While some praised the mother for showcasing breastfeeding as natural, others were of the opinion that it should be a private affair.

“I don’t think I’ve done anything different than millions of moms before me,” Small told CNN.  The only difference here is that Small’s mom proudly snapped a couple of photos. The rest is viral history.

Small is an elementary school teacher from Grande Prairie, Alberta. She’s been playing hockey since she was 4.

Milky Way Lactation Services quoted Serah as saying, “I felt my milk come in and leak as I played and between periods I would strip down to feed my 8-week old babe. Being a mom is absolutely amazing and I’m so happy I got to do something I absolutely love while still meeting my babies needs. Our bodies are amazing and this weekend was the first time I truly appreciated mine.” Small said she’d been having issues feeding young Ellie while covered, which is why she stripped down.